You’re Not my Stereotype 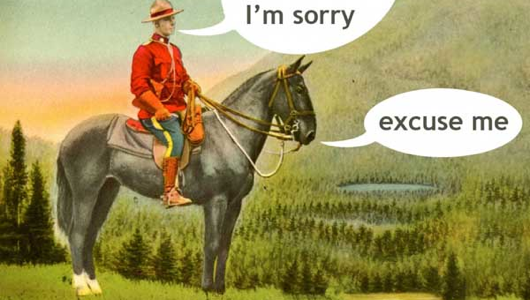 In the midst of the Raptors’ run to the NBA championship, Jimmy Kimmel sent a remote crew to downtown Toronto. An interviewer urged pedestrians to trash talk the Golden State Warriors. On his talk show, Kimmel aired some of the responses:

“What kind of monsters are those people,” Kimmel joked.

Yes, Canadians have a reputation for being polite. We often see it as a point of pride.

Two years ago, a survey asked Canadians what they appreciate most about our country. Canada’s health care system was #1. At #3 was our politeness – a supposed national characteristic, hard to measure, which scored better than tangible things like our natural resources and hockey.

Is that stereotype – the polite Canadian – a reality?

Last year, linguistic experts from McMaster University in Hamilton tested the theory. They analyzed the language used in nearly 40 million tweets, broken down by Canadian and American users. The team published their results in the online journal PLOS ONE.

You know the image. Americans had a Civil War. Canadians are just…civil.

McMaster reported that the study suggests that “Canadians tend to be polite and nice while Americans are negative and assertive…even if those stereotypes aren’t necessarily accurate.”

Daniel Schmidtke, co-author of the study, said the word choices match what we associate with people from Canada and the U.S. However, other studies have found no convincing evidence that the traits of citizens of the two neighbouring countries are any different at all.

“The Twitter behaviour we observe doesn’t reflect the real underlying personality profile of an average American or Canadian,” says Schmidtke.

Those profiles are actually quite similar. One study, in the Journal of Research in Personality, found that national character stereotypes are inaccurate for most traits and cultures.

You may well be polite, but odds are that, as a country, we’re not exceptionally so. Despite that fact that, in an Ipsos Reid survey for Historica Canada, 92% of Canadians agree that we’re a polite nation.

How do we perceive ourselves?

Self-perceptions can be tricky. In many surveys, about any behaviour you can think of, everyone thinks that they’re above average. That’s impossible.

Which leads me to a few surveys I came across that describe how Canadians act when we’re in transit. Something that we’ll do in high numbers as Canada Day approaches and people start to take summer vacation. Are we really polite or is that a mirage?

Start with our conduct on the road. A survey by Kanetix found that almost all Canadian drivers (98%) feel they’re polite, but that other drivers are far less courteous. Both can’t be true.

Seems we might not be near as polite behind the wheel as we suspect. Or maybe we just yell a Canadian “sorry!” out the window.

This month, Expedia released an airplane and hotel etiquette study. Canadian travellers did fare better than the global average in a few measures of politeness. Perhaps kindness is a better word.

One-third of Canadians (compared to 29% globally) have offered to switch their seat on a flight so other passengers could sit together. Canadians are also more likely to help fellow passengers put their luggage in the overhead bin. Just over half of Canadians (52%) said if they were sitting next to a passenger who smelled extremely bad they’d politely ask the flight attendant to be re-seated. Guess we’re so well-mannered that the rest would just hold their nose and take it.

I was more intrigued by the part of the survey that looked at Canadians’ actions in vacation rentals. Three-quarters (77%) said they wouldn’t go through the personal items of the host, and two-thirds (68%) would never wear the host’s clothes and shoes. Is that high marks for politeness? What the heck are the rest of the travellers doing in a stranger’s closet?

Three-quarters of Canadians (77%) also said that peeing in a pool was inappropriate behaviour at a vacation rental. The fact that this isn’t close to 100% gives me the shivers. I thought P stood for polite or patriotic. Guess not.