Why Do People Believe Conspiracy Theories? 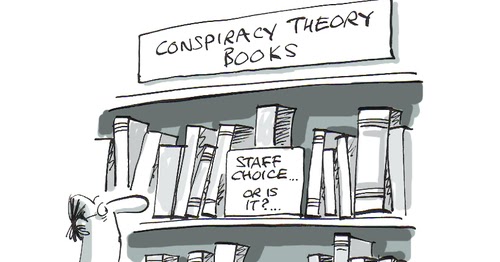 The stories that some people tell themselves can rival any tale spun by the greatest novelist. This summer, as COVID-19 spread, a survey of almost 2,300 Canadian adults by Vox Pop Labs found that:

Why do people believe and spread conspiracy theories? It’s easy to mock, but can be hard to understand.

The devotees are everywhere. This month, a group of conspiracy theorists and anti-maskers – 1,000 people in all – took to the streets in Vancouver to protest. It was called the Freedom Mega Rally.

Some there claimed that there’s no pandemic. As one protester said, “It’s about people coming together, of like minds, and questioning what many of us believe could be a narrative that’s feeling a little bit scripted.”

One gaggle of protesters screamed at a media outlet, decrying “fake news” and calling for coverage of QAnon claims. “You sold your soul,” yelled one man at reporters.

QAnon, for the uninitiated, refers to a far-right conspiracy theory that (take a breath) says Satan-worshiping pedophiles…consisting of elite institutional figures, members of the “deep state” and A-list celebrities…are running a global child sex-trafficking ring and feeding off the blood of children…and also plotting against Donald Trump…who is the only person who can stop this cabal…and who will launch a day of reckoning known as “The Storm”…during which members of the cabal will face mass arrests and get sent to Guantanamo Bay…as part of “The Great Awakening”…after which we’ll enter an age of utopia.

Got that? And it gets weirder from there.

FYI, this is the lunacy that Trump refused to denounce at a town hall. He only said that he’s also against pedophilia and “knows nothing” about QAnon – a group whose support he said he appreciated back in the summer. One poll found that more than one-third of Trump voters believe at least part of the QAnon claims.

Enough about Trump, who has an entire Wikipedia page devoted to more than two dozen conspiracy theories he himself has promoted.

This is a golden age for conspiracy theories, but they’re nothing new and often spring from something primal.

How the paranoid survived

Brian Dunning, host of the Skeptoid podcast, writes that “The human brain evolved in such a way as to keep itself alive to the best of its ability.”

What might threaten people? Dunning uses a classic example: something rustling in the tall grass. Go back to the beginning, and he says some of our ancestors figured it was just the wind. Others were more cautious, suspected a predator and, says Dunning, jumped for the nearest tree.

Over time, through natural selection, the laid back ancestors got eaten, and the cautious and paranoid ones perpetuated. Patterns repeated when we started living in tribes.

“The brains most likely to survive were those who saw a panther in every breath of wind, an angry god in every storm cloud, a malevolent purpose in every piece of random noise,” writes Dunning.

“We are alive today in part,” he continues, “because our brains piece random events together into a pattern that adds up to a threat that may or may not be real. As a result, we are afraid of the dark even though there’s rarely a monster; thunder frightens us even though lightning is scarcely a credible threat; and we perceive the menace of malevolent conspiracies in the acts of others, despite the individual unlikelihood of any one given example.”

So why isn’t everyone a conspiracy theorist? Because, Dunning notes, we also have an intellect. So “rational, conscious thought”, he says, can win out over “native, instinctive impulses”.

There have been conspiracy theories about everything from the moon landing to the JFK assassination, the contrails of jets to the Illuminati, 9/11 to the deaths of Tupac and Biggie, and vaccination to climate change.

Here are four reasons, psychologists and social scientists say, why people can gravitate to conspiracy theories.

Now, layer all that onto societies where racism, xenophobia, collective narcissism, polarization, grievances, disinformation, scapegoating, fear and authoritarianism already run high, and the ground for conspiracy theories is fertile.

“Personality traits that predispose people to prejudice, discrimination and hostility towards other groups go hand in hand with a tendency to believe conspiracy theories,” writes Jan-Willem van Prooijen, a Dutch psychology professor and an editor for Personality and Social Psychology Bulletin.

It’s pointless to argue with conspiracy theorists. There’s no objective logic here. Any facts you present to counter the nonsense can be twisted as more evidence of the plot. The believers tend to feel smug in possessing the inside knowledge. They’re the ones who have the answers, and the rest of us are just sheep who go along.

We live at a time when conspiracy theories are rampant. But that has always been so, as long as humans have roamed our wonderful, often dangerous (and some would say flat) Earth.