Why Bad Language is Good for You 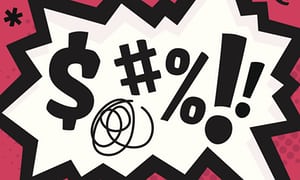 A few years ago, Bryan Price, manager of the Cincinnati Reds, was talking to a scrum of reporters. The baseball team was in the midst of a losing streak, and Price was upset about some coverage. Over five-and-a-half minutes, he dropped 77 F-bombs (one every 4.3 seconds), as well as 11 other assorted profanities.

It was an obscenity opera. A whole paragraph of Price’s Wikipedia bio is devoted to the tirade. Afterwards, Price apologized for his “choice of words”.

They certainly were choice words. In the moment, a well-placed expletive can feel great, but is it actually beneficial? Emma Byrne says hell yes. Well, she phrases it more strongly than that.

Byrne is the author of the recent book Swearing is Good for You: The Amazing Science of Bad Language. She and other researchers cite abundant reasons why we should use (so called) bad language.

2. Create tighter workplaces. Swearing can help build teams at work. “Scientists have shown that teams who share a vulgar lexicon tend to work more effectively together, feel closer and be more productive than those who don’t,” writes Byrne. One study of a New Zealand soap factory showed that a team of workers in a soap factory routinely swore with each other, but not as much with colleagues on other teams. Swearing was a form of solidarity. While some might see swearing at work as unprofessional, others find it motivational. In a survey by the work management platform Wrike, 36% of millennials said swearing reflects passion for their work, and 44% said they prefer workplaces where co-workers swear.

3. Curb violence. By making our emotions abundantly clear, with just the right vulgarities, we can hold our more hostile behaviour in check. That catharsis protects us and others. “Swearing primes us to think aggressive thoughts while, paradoxically, making us less likely to be physically violent,” says Byrne.

4. Be persuasive. Swearing can sway others when used as a rhetorical device. For leaders, says Byrne, a strategically-placed swear word can convey passion or authenticity. One caveat – that sometimes depends on the speaker’s gender. Byrne notes a study by Robert O’Neil of Louisiana State University. He showed subjects transcripts of speeches containing multiple profanities. “If he told the volunteers the speaker was a woman, they rated the swearing as more offensive than when they were told that the speaker was a man,” Byrne writes.

5. Reduce the perception of pain. Dr. Richard Stephens, a behavioural psychologist in the U.K., had volunteers stick their hands in ice water. As time passed, they either swore or used a neutral word. Stephens compared how long they kept their hands submerged. On average, when they cursed the volunteers were able to keep their hands in the frigid water 50% longer. Stephens’ conclusion: swearing helped people to withstand pain. In another study, he showed that athletes who swore improved their performance by up to 8.2%, as it helped to distract them from the pain of intense exercise.

6. Show honesty. Are people who swear more likely to break other social taboos, like lie? Or are they more likely to be authentic? Researchers at Maastricht University wondered about this old social science conundrum. They gave 276 individuals a personality questionnaire to measure levels of truthfulness, then surveyed them to ask how often they used profanity. There was a distinct correlation between swearing and honesty. The researchers also looked at 70,000 interactions on Facebook, and compared the use of profanity in posts with levels of honesty. The same result; people who swear are more honest.

“Because profanity is powerful, it behaves differently from other types of language. It gets encoded differently in the brain,” writes Benjamin Bergen, author of What the F: What Swearing Reveals About Our Language, Or Brains and Ourselves.

Swearing is so primal that it doesn’t even require traditional language skills. We have our language centres are on the left side of the brain. Yet as Bergen explains, some people don’t need those centres for swearing. He describes a man whose entire left hemisphere was removed due to a brain tumour. “He lost all capacity for intentional language. But he still spontaneously and articulately uttered expletives out of frustration,” writes Bergen.

In that case, he says swearing was “driven by evolutionarily old structures known as the limbic system, buried deep in the brain, that we share with primates and other mammals, where they are responsible for emotional calls, shrieks, cries, and growls.”

Maybe we should swear even more often, whether for its utility in communications or its positive psychological and physiological impacts.

Some people might say the cursing is coarse. Yet as research shows, there are many pros to profanity.