When Communicating, Beware the Curse of Knowledge 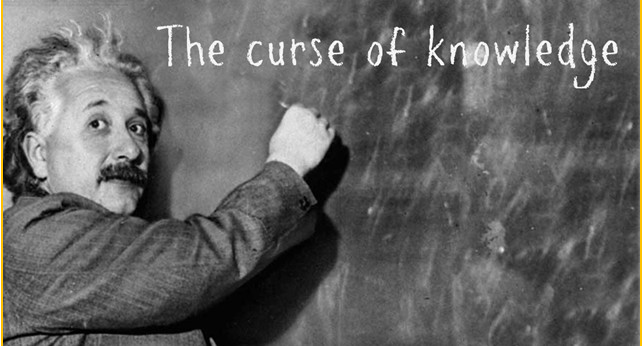 When you’re trying to convey a message, do you suffer from the burden of TMI? That usually means you’ve revealed excessive personal details and made an audience uncomfortable – “too much information”. Yet that’s not the only way of looking at TMI.

One hazard for communicators is the curse of knowledge. That’s what Alan Alda describes in his new book, If I Understood You, Would I Have this Look on My Face?

The book concerns the art and science of communicating. Aside from being an actor, Alda hosted the PBS show Scientific American Frontiers. That work led him to help found the Center for Communicating Science at Stony Brook University in New York.

Alda writes that having too much information about a subject can be a disadvantage. Why? Because you can’t imagine what it’s like not to have that knowledge.

He gives a great example. It comes from an experiment where people were divided into two groups. One had to get the other to guess the names of well-known songs, like “Happy Birthday”. There was a catch. The people who knew the song couldn’t hum it or give hints. All they could do was tap the rhythm on a table.

Try it. Pick something that everyone would know, like a nursery rhyme or a classic hit. Tap it out. Do you think someone hearing the drumming of your fingers would get it?

In the experiment, the tappers had to guess how often the listeners could identify the songs. They figured half the time. In fact, of the 120 songs that were tapped, the listeners correctly named three – a success rate of 2.5%.

In doing the exercise the tappers had a big drawback. It was the curse of knowledge:

The curse of knowledge has huge repercussions around transferring information, verbally or visually. There’s a danger in failing to understand or identify with others who don’t yet know what you already know.

The linguist Steven Pinker goes as far to say that “the curse of knowledge is the chief contributor to opaque writing.” Too often, he says, writers forget that their audiences “haven’t learned their jargon, don’t seem to know the intermediate steps that seem to them to be too obvious to mention, and can’t visualize a scene currently in the writer’s mind’s eye.”

It’s hard to forget what you already know. Yet that’s vital to avoid being out of tune with your audience.

As Alda explains in his book, we sometimes communicate using language just beyond the audience’s reach. We have too much information, and assume the audience is on the same wavelength. When we do that, we hear the melody, he writes, “but the people listening only hear the tapping – and they’re liable to think it’s another song entirely.”