Unclog Your Creativity with the Power of Showers 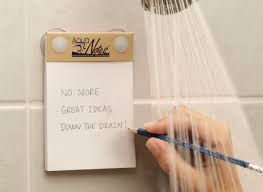 Elon Musk, the SpaceX founder, Tesla product architect, SolarCity co-founder and Hyperloop visionary, was once asked this: “What daily habit do you believe has the largest positive impact on your life?”

His answer was the same as the habit that screenwriter Aaron Sorkin (The West Wing, The Newsroom, A Few Good Men, The Social Network) partakes in up to eight times a day.

Why? It’s about sparking creativity.

Lots of people get some of their best ideas in the shower. In there, I’ve had whole sections of something I’m working on pop into my head fully formed. You’ve probably had your own eureka moments, whether it’s about brainstorming a work problem or a personal challenge.

In so many ways, the shower is the perfect environment to let your mind go free: you’re enclosed, alone, tranquil, warm, with the sound and the steam offering an escape from distractions. And the task we’re engaged in, washing our bodies, is so automatic as to be mindless.

As one writer explained, we can boost our creativity by shutting down the executive functions in our brains. When we’re in the shower, everything else melts away.

“The water is about the same temperature as the skin, so you don’t feel the boundary between what’s inside the body and outside. So you naturally flow into this brain state where you’re not worrying about what’s going on outside of you; you’re focusing on your own thoughts,” says John Kounios, director of the doctoral program for Applied Cognitive & Brain Sciences at Drexel University.

Dr. Scott Barry Kaufman, a cognitive psychologist and co-author of Wired to Create: Unraveling the Mysteries of the Creative Mind, did a survey on how people think in the shower. Almost three-quarters of respondents, 72%, reported having some kind of new understanding while they bathed. One in seven people, like Sorkin, even take showers solely to get inspired.

“The relaxing, solitary and non-judgmental shower environment may afford creative thinking by allowing the mind to wander freely, and causing people to be more open to their inner stream of consciousness and daydreams,” says Dr. Kaufman.

You don’t need a shower stream to trigger that stream of consciousness. Creativity can of course strike anytime. But as an article in Reader’s Digest pointed out, the shower offers something special: the perfect time.

Most often, for most people, showering takes place early in the morning or late at night – the precise times we’re waking up or winding down. Either way, our brains can be as foggy as the shower stall, allowing us to be even more receptive to wild ideas and insights.

Worried about holding onto those thoughts until you dry off? Get a load of this innovation that Marriott Hotels just announced they’re testing.

Marriott did a survey of 5,000 international travellers, and 52% said their best ideas come while showering. So in an Irvine, California hotel they’re experimenting with touch-sensitive technology built into the shower door. When steam builds up, it’s easy to write or draw on the door with your finger. The door technology will then take those scribbles and e-mail them back to the hotel guest.

Okay, you might not be able to do that at home. But if you’re looking to think creatively, it pays to lather, rinse, repeat.