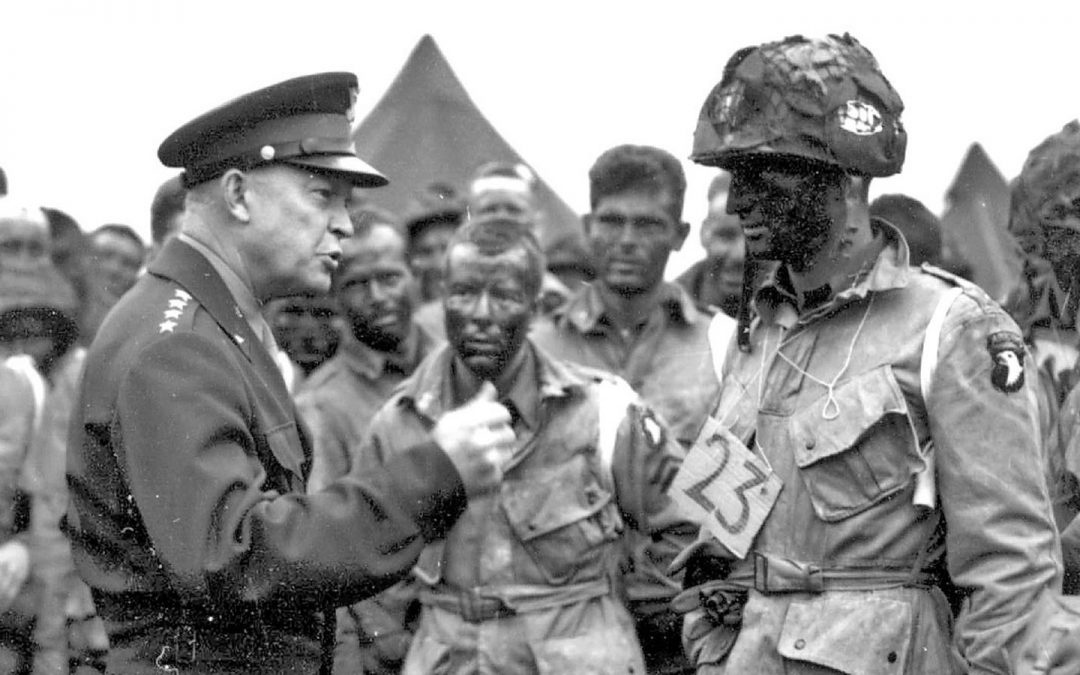 Seventy-five years ago, on the eve of what was arguably the most momentous day of the 20th century, a general wrote two notes. Leadership is about action, not words. But the words that leaders select speak volumes.

Gen. Dwight D. Eisenhower, the Supreme Allied Commander, wanted to send a message to the 160,000-member expeditionary force that would soon sail and fly to Normandy, in German-occupied France.

Operation Overlord – what we commonly call D-Day – was the largest amphibious landing in history. It included some 14,000 Canadians at Juno Beach, along with fighter and fighter-bomber squadrons of the Royal Canadian Air Force.

The statement that Eisenhower composed in advance of the invasion was just 236 words. His edits are revealing.

In one spot of his draft, he originally wrote that “we shall bring about” the destruction of the German war machine and the “overthrow” of Nazi tyranny. He changed the first part to “you will bring about”, and replaced “overthrow” with “elimination”. More emphatic and direct.

Elsewhere, after writing that the eyes of the world are on the troops, and that they carry the hopes and prayers of liberty-loving people, Eisenhower crossed out the phrase “You will not fail them.” In his closing lines, he also crossed out “We can and we will win.” Instead, he inserted this line: “We will accept nothing less than full victory.” Again, a bolder statement. For the forces that would cross the English Channel, there was no other option.

While not wanting doubt to enter the minds of the troops, Eisenhower knew that success wasn’t guaranteed. So he wrote a second note, which he hoped he wouldn’t have to deliver, and folded it in his wallet. In it, he announced the failure of the D-Day assault.

That handwritten message, too, is short. Only 65 words. Today it’s housed in a vault at the Dwight D. Eisenhower Library in Kansas. You can see his edits and markings on this one. His leadership is evident.

He began it saying: “Our landings in the Cherbourg-Havre area have failed to gain a satisfactory foothold and I have withdrawn the troops.” Then he made an important change. Eisenhower started to write “This particular operation…” but revised that to “My decision to attack…”

Eisenhower wanted to take personal responsibility if the mission went wrong. That’s even clearer with his last line: “If any blame or fault attaches to the attempt it is mine alone.” You can see that Eisenhower underlined the words “mine alone”.

The note stayed in his wallet. He never needed it.

On the morning of D-Day, Canadian Prime Minister Mackenzie King gave a radio address. In announcing the invasion, he said “we have every reason for confidence in the final outcome”, although the fighting will be “heavy, bitter and costly.”

This year for the 75th anniversary, leaders from the U.S., Britain, Canada, Australia and other countries of the Allies are gathering in England and France to commemorate the triumphs and sacrifices of D-Day.

Leaders have been doing so for decades, especially on anniversaries that end in a 0 or 5, like this year’s. One who didn’t make the trip back in 1954, for the 10th anniversary, was Eisenhower, then the U.S. President.

Historian Michael Beschloss, writing in the New York Times for the 70th anniversary of D-Day, said that Eisenhower would never have rejected any advice to make the trip and remind people of what he had achieved.

As Beschloss wrote, “Pointedly he did not visit Normandy or stage a White House ceremony to extol his own leadership. Self-celebration was mostly alien to the men and women of World War II’s ‘greatest generation’. Eisenhower’s painful memories of soldiers dying as a direct result of his command decisions had caused him to break down in public at least once before.”

Instead, Eisenhower released a 308-word statement to mark the 10th anniversary. He praised the joint efforts of the cooperating nations, and pointed to the unity needed to continue to meet the challenges of the day.

If that spirit isn’t always evident, Eisenhower wrote, it “is cause for profound regret, but not for despair.” He concluded his note this way: “The courage, devotion and faith which brought us through the perils of war will inevitably bring us success in our unremitting search for peace, security and freedom.”

It’s a sentiment worth remembering any time. Certainly as we recall the events of 75 years ago, and the Canadians and others lost, on the beaches of France.