The Radical Roots of a Hallmark Holiday 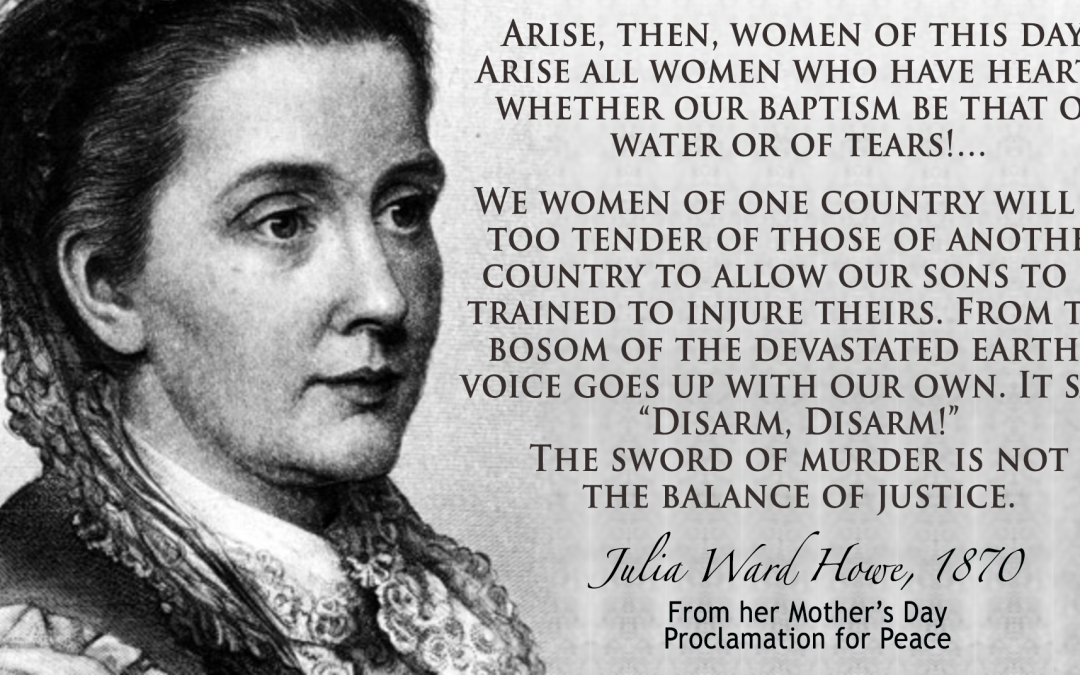 In the gooey sentiments business, this is the motherlode.

According to the Greeting Card Association, Mother’s Day is the third-largest holiday for the sector (behind Christmas and Valentine’s Day).

Mother’s Day cards generate almost $850 million in annual sales in the U.S., part of the $28 billion in total spending for the celebration in that country alone. In Canada, spending estimates are close to $2 billion.

Hallmark, in a news release about this year’s card lineup, states: “From smiles to tears, warm hugs to gentle prods, moms and mother figures, more than ever, are leading by example. They teach everyone around them how to listen, laugh, apologize, forgive and love unconditionally.”

Of course, Hallmark has a commercial interest as a greeting card company – or as the industry likes to say, a “social expressions company”. Hallmark uses other terminology still to describe their corporate purpose as “creating a more emotionally connected world”.

Is Mother’s Day just a Hallmark holiday? Yes and no.

The cynical view is that the celebration on the second Sunday in May was created to sell cards, jewellery and spa gift certificates. Don’t forget all those bouquets. As Fortune once put it, “Mother’s Day is like the Super Bowl for florists.”

The Hallmark website includes a history of Mother’s Day. As they tell it, Anna Marie Jarvis, born in 1864 in Webster, West Virginia, was the driving force. Her mother, Ann Reeves Jarvis, died on May 9, 1905. On the third anniversary of the death, Anna Marie Jarvis held a memorial service to honour her beloved mother and all mothers. That started the ball rolling. Mother’s Day became an official observance in 1914.

But that brief account only tells part of the story. There’s much more to Anna Marie Jarvis. And the radical roots of Mother’s Day have more to do with social progress and peace than with sentimentality and giving mom a day off.

A pacifist and a feminist

It starts with Julia Ward Howe, an American poet and author born in 1819. She was also an advocate and activist, fighting against slavery and for the right of women to vote. Howe headed a couple of suffrage associations, and edited a suffragist magazine. As well, she founded an association that called for greater women’s education, and was president of the Association for the Advancement of Women.

In 1870, Howe wrote an “Appeal to Womanhood Throughout the World”, which later became known as the Mother’s Day Proclamation. It drew from her feelings as a pacifist, horrified by the destruction of the Civil War and the Franco-Prussian War, and as a feminist. Howe believed that women could be a political force for good to re-shape society.

In part, her proclamation read:

“In this day of progress, the ambition of rulers has been allowed to barter the dear interests of domestic life for the bloody exchanges of the battle field. Thus men have done. But women need no longer be made a party to proceedings which fill the globe with grief and horror.

“Arise, all women who have hearts Say firmly: We will not have great questions decided by irrelevant agencies. Our husbands shall not come to us, reeking with carnage, for caresses and applause. Our sons shall not be taken from us to unlearn all that we have been able to teach them of charity, mercy and patience.

“In the name of womanhood and of humanity, I earnestly ask that a general congress of women be appointed to promote the alliance of the different nationalities, the amicable settlement of international questions, the great and general interests of peace.”

Two years later, Howe asked that a Mother’s Day be celebrated every year in June. Twenty years after that, she came up with a new and bold idea: turn the 4th of July into Mother’s Day.

Even before writing her Mother’s Day Proclamation, Howe knew of and was reportedly influenced by the work of another activist – none other than Ann Reeves Jarvis, the mother of the woman who would become the mother of Mother’s Day.

Before the Civil War, Ann Reeves Jarvis organized Mother’s Day Work Clubs, where women raised money for medicine and for inspected bottled milk and food. The clubs also hired help for households where the mothers had contracted tuberculosis.

During the Civil War, the clubs cared for the wounded and fed and clothed soldiers on both sides. After the war ended, Ann Reeves Jarvis brought together people from both sides of the conflict for what was called a Mother’s Friendship Day.

Beyond being a social activist and community organizer, Ann Reeves Jarvis taught Sunday school and lectured widely. One talk, her daughter Anna recalled, was about having a day to memorialize and pay tribute to mothers.

All this was the backdrop to Anna Marie Jarvis advocating for a Mother’s Day in 1908.

What did the founder of Mother’s Day think about her creation? Anna Marie Jarvis never profited from the day, and hated how it became commercialized.

That included railing against Mother’s Day cards (don’t tell Hallmark): “A printed card means nothing,” she once said, “except that you are too lazy to write to the woman who has done more for you than anyone in the world.”

She even once issued a news release that decried the “charlatans, bandits, pirates, racketeers and other termites that would undermine with their greed one of the finest, noblest and truest movements and celebrations”.

Later in life, she actually started a petition to rescind Mother’s Day, so bothered was she by what the event had become.

Anna Marie Jarvis died in 1948, having been placed in the Marshall Square Sanitarium west of Philadelphia. In ill health and destitute, she never knew that people from the greeting card and florist industries paid some of the bills.

Despite how the day is now a commercial bonanza, some Mother’s Day ventures aim to raise awareness of current social issues.

This year in the U.S., for instance, you can order from the Moms Deserve More Flower Shop. All proceeds go to a non-profit that raises funds and awareness for policies that support all mothers.

The flowers will cost just a donation of your choice. But they come with price tags that highlight some economic realities for many mothers: unpaid labour, lost wages, interrupted careers, and no parental leave.

There’s the Lost Job Bouquet ($36,000), the Paid Leave Bouquet ($9,500), the Lack of Childcare Bouquet ($13,000) and, if you’re feeling generous, the Unpaid Work Bouquet ($800 billion, representing what Oxfam says women have lost globally during the pandemic from job cuts and staying home to care for loved ones).

Anything we do to lift mothers, around the country and the world, is in the spirit of the activism of matriarchs Julia Ward Howe, Ann Reeves Jarvis and Anna Marie Jarvis.