The “Interfaith” Message Processor and the Tower of Babel 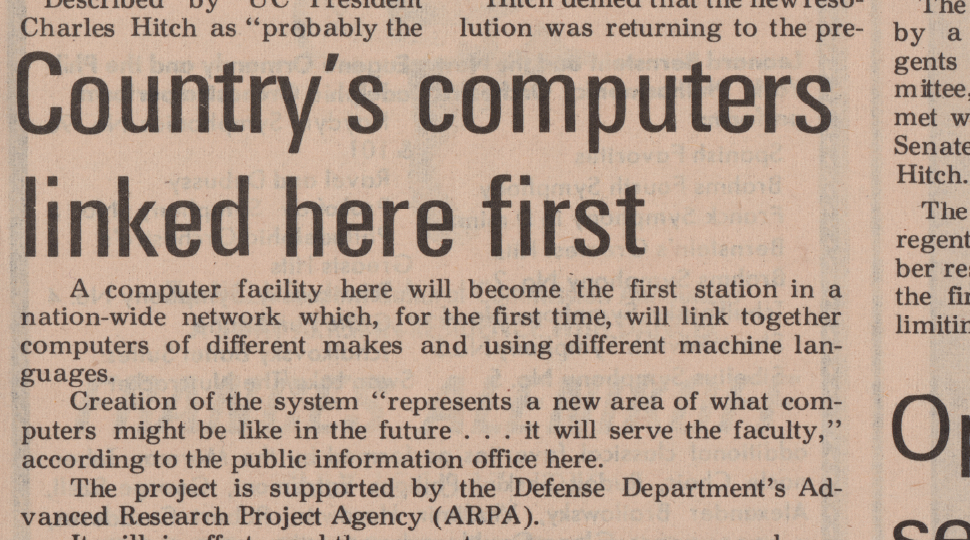 What events from the summer of 2019 do you figure will resonate the most 50 years from now? It’s not always easy to predict.

Look back 50 years. The summer of 1969 saw Apollo 11 land on the moon, the Manson Family murders and Woodstock. All within a span of 26 days. Yet it was another event that summer, one that the public hardly noticed, which has proven to have a lasting impact on how the world connects.

It happened on August 30, 1969, when the first Interface Message Processor (IMP) was delivered to UCLA.

What’s an IMP? It’s a set of electronic switches (a packet switching node, to be exact) that allow one computer to communicate with others on a network. In the subsequent months, IMPs were installed at three additional schools: Stanford University (October 1969); University of California, Santa Barbara (November 1969); and University of Utah (December 1969).

This was the origin of the ARPANET computer network, which morphed into the Internet.

Three days after the initial IMP arrived, on September 2, 1969, two giant computers at UCLA exchanged data over a network. That was a first. Leonard Kleinrock, a UCLA researcher and engineer, supervised the experiment. “The Internet took its first breath of life that day,” he said later.

Today, we’d call an IMP a router. The IMPs were built by Bolt Beranek and Newman (now BBN Technologies) of Cambridge, Massachusetts. When the company won the contract in January 1969, they received a congratulatory telegram from Massachusetts Senator Ted Kennedy, Except that he (or his office) must have misunderstood or misread the word Interface. Because Kennedy wished the company the best on building an “Interfaith Message Processor”.

After the second IMP was delivered, the system was tested. Could UCLA and Stanford communicate via computer? The first word to be transmitted between the two was supposed to be “login”. But after UCLA sent the “l” and “o” on the command line, the Stanford system briefly crashed.

So the honour for first word on the Internet goes to “lo”. Which phonetically is “hello”, though it wasn’t intended that way. Kleinrock saw it as “lo” as in “lo and behold” – “We didn’t plan it,” he said, “but we couldn’t have come up with a better message: short and prophetic.”

You know the biblical tale of the Tower of Babel? It concerns people on a common mission who suddenly spoke different languages, making it impossible to communicate.

There are many lessons to draw. The novelist Toni Morrison, who was awarded the Nobel Prize in Literature in 1993, referenced the Tower of Babel in her Nobel speech. Morrison died on August 5, making this an appropriate time to revisit what she said:

“The conventional wisdom of the Tower of Babel story is that the collapse was a misfortune. That it was the distraction, or the weight of many languages that precipitated the tower’s failed architecture. That one monolithic language would have expedited the building and heaven would have been reached. Whose heaven? And what kind?

“Perhaps the achievement of Paradise was premature, a little hasty if no one could take the time to understand other languages, other views, other narratives period. Had they, the heaven they imagined might have been found at their feet. Complicated, demanding, yes, but a view of heaven as life; not heaven as post-life.

“Word-work is sublime, because it is generative; it makes meaning that secures our difference, our human difference – the way in which we are like no other life.