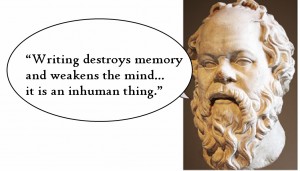 For a couple of recent projects, I had to do something I rarely do anymore: take notes by hand.

In both cases I was visiting an institution to observe certain professionals in action. I had to be able to set a scene when writing about them. So I was a fly on the wall. To be unobtrusive, I decided to jot down on a notepad instead of typing on my laptop.

When I reviewed my notes later, I noticed their physical structure. Some of my thoughts were highlighted simply by the size of my handwriting. Some were circled and had arrows between them to remind me of a connection. Other thoughts were notated with symbols that told me where and how they might fit. Still others were expressed as diagrams.

My notes weren’t extensive, and didn’t have to be. My scribbles got at the core of what I was there to study. I picked up on some telling details that allowed me to paint a picture when I sat down to write.

When’s the last time you wrote a draft of anything substantial by hand? I never do. Same with the notes I take for research. Here was an exception.

Taking notes by longhand seems like more of a chore these days. Is there an upside?

A few years back, researchers Pam Mueller of Princeton University and Daniel Oppenheimer of UCLA conducted a study to examine just that. They had college students watch TED talks. One group of students was given laptops, the other notebooks. Each was asked to take notes in whatever way they wanted.

After, the students had to answer a series of questions based on the talk they saw. Some questions revolved around straightforward facts (i.e. there was a definitive answer), and others were more conceptual (i.e. the students had to interpret and come to a conclusion). The results were published in the journal Psychological Science.

An article in Scientific American about the study noted that writing by hand, slower and more cumbersome, forces note-takers to “listen, digest and summarize so that they can succinctly capture the essence of the information.” The laptop students, typing quickly, took notes “in a fairly mindless, rote fashion, with little analysis or synthesis by the brain…this kind of shallow transcription fails to promote a meaningful understanding or application of the information.”

This shouldn’t be an either/or choice

While I use my laptop to take notes virtually all of the time, I try to be discerning. I don’t just transcribe. I tend to be more selective than expansive. I filter out some of the noise as I go, shift thoughts around to connect them, and add my own paraphrasing in parentheses to sum up a point.

In looking at how we can best accumulate and process information, the technology should be secondary. The approach we take is what matters.

We’ve always had naysayers who argued that technology gets in the way of genuine comprehension. Take Johannes Trithemius, a handwriting advocate who railed against a novel piece of communications equipment. Not a laptop or smartphone, as he lived in the 1400s. His target was the newfangled printing press.

Trithemius, a German abbot, understood the benefit of mass-producing books. Still, he suggested that copying by hand built character and produced more beautiful final products. Printed volumes, he said, would never equal the work of scribes.

Then again, there have even been critics who felt that writing itself, by hand, was a lazy way of mastering information. People like Socrates.

More than 2,400 years ago, Socrates declared that handwriting weakened the necessity for memory. He feared that people would seem to know things just because they could rely on the written word that was no part of themselves.

Socrates sure would have hated Google, Siri and Alexa.