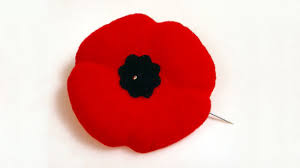 How many poems do you figure have had its lines or imagery reproduced on a banknote, coin, stamp and statue? This one has, and a museum in Belgium bears its name too. Many Canadians recite the poem every year. This week, like this time every year, it’s running through my head.

Here are seven things you may not know about the poet.

2. In university he graduated with a Bachelor of Arts, then attended the University of Toronto medical school. He tutored other students to help cover his tuition, including two who were among the first women doctors in Ontario.

3. While studying medicine, he continued to write poetry, publishing 16 poems in several magazines.

4. He was a resident at Toronto General Hospital, then interned in Baltimore at Johns Hopkins Hospital. In the early 1900s, he became a pathologist at the Montreal General Hospital and later at the Royal Victoria Hospital. He wrote extensively for medical journals, and co-authored a medical textbook. Still, he found time to keep writing poetry, and belonged to the Pen and Pencil Club, a group that also included Stephen Leacock.

5. When World War I began in August 1914, he enlisted and was appointed brigade-surgeon to the First Brigade of the Canadian Field Artillery.

6. In April 1915, he found himself in the trenches near Ypres, Belgium, the scene of some of the heaviest fighting of the war. One day, one of his close friends, Alexis Helmer, was killed in action and buried in a makeshift grave. Reflecting on the setting and the wild flowers blooming, he began writing a poem – the second-to-last he would ever write. In December 1915, England’s Punchmagazine published it.

7. After taking ill in January 1918, he was diagnosed with pneumonia. At the same time, he learned that he’d be the first Canadian appointed as a consulting physician to the First British Army. He’d never get to assume that post, dying on January 28, 1918 at age 45. He’s buried in Wimereux Cemetery, just north of Boulogne, France.

The physician-poet is John McCrae. His great work is In Flanders Fields, which has been called Canada’s unofficial national poem. Its reference to the poppies that grow between the graves became the symbol of remembrance for the war dead of Britain, Canada, other Commonwealth countries, France and the U.S.

This Remembrance Day, Saturday, November 11th, we’ll again recall those war dead with a moment of silence. So a salute to them, and to the words of the poet.