Reclining Seats and the Contagion of Rudeness 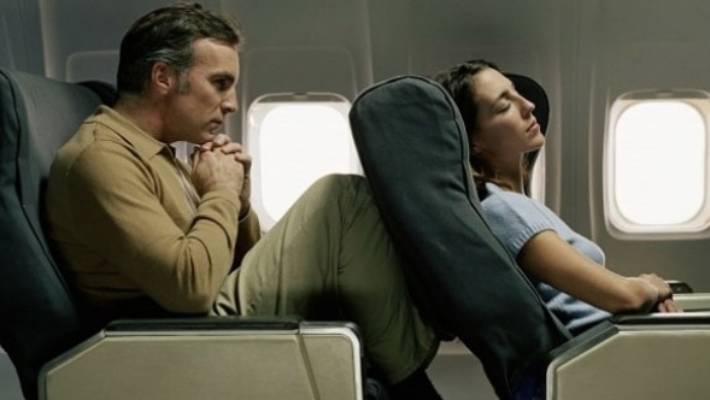 Consider the woman who let loose with profanities on one flight. She first swore at a child who accidentally bumped her while she was asleep, then at a flight attendant who opened a can of pop and got a bit of spray on her.

Or how about the group of 18 British and Irish tourists who, after getting drunk, started a food fight on a trans-Atlantic flight. After the flight attendants cut off their booze, some of the unruly travellers sent their children to steal bottles off the drinks cart. Members of the U.S. wrestling team happened to be on board, and subdued the rambunctious group.

Here’s another one. When a Cambodian businessman landed in Phnom Penh, an airline representative told him on the tarmac that he had to pay an additional fee for his luggage to be unloaded. The man grabbed a gun from his bodyguard and shot one of the tires of the 737.

R.E.M. guitarist Peter Buck once got out of control on an overseas flight. It happened after a flight attendant refused to serve him a 16th glass of wine. Buck sprayed two crew members with yogurt, and tried to play a CD on the drinks cart. His excuse? The alcohol interacted with his sleeping pills, and turned him into a “non-insane automaton”.

Which brings me to Wendi Williams and the passenger sitting in the row in back of her. By now, you may have seen the viral video of the January incident on American Airlines. Williams had her seat in the recline position, and the man behind her repeatedly pounded the back of her seat.

There has been a big online debate about who’s right and who’s wrong here. When I heard the story, I was more interested in the breakdown in communications, and how bad behaviour can spread.

We don’t know if Williams asked the man behind if he minded if she reclined. Her version is that he asked her “with an attitude” to return her seat to the upright position while he was eating. Which she says she did. Keep in mind that his row was at the very back, so he was squished and had no option to recline his own seat.

When Williams reclined her seat yet again, the bashing started. Williams started to record it on her phone. A flight attendant told her to stop, as recording other passengers without their consent is unlawful. Now, Williams wants the flight attendant fired and has threatened legal action against the bashing passenger. What could have been resolved amicably has now taken on a life of its own.

It would be great if it was always easy to ask permission, and to express our discomfort at someone else’s actions. But of course, that dance can be quite complex. Many people are conflict-averse, preferring to swallow their feelings and run (flight) as opposed to stirring the pot (fight).

As a piece in Psychology Today states, when faced with a conflict people can suffer from the triple As: apologize, agree and accommodate. Avoiding conflict cuts off honest communication, the article notes, and can lead to lingering resentment and eventual blow-ups. In this way, sidestepping conflict can accelerate conflict.

Seeing the world through rude-coloured glasses

It seems like this may have happened to the passenger in back of Williams. Instead of clearly and politely voicing his feelings, he let his fists do the talking. In this flight fight, he thought Williams was being rude, and she thought the same of him. The flight attendant got caught up in the drama, and Williams thinks she was rude too (she rolled her eyes at the situation, Williams claims).

Here’s the thing: rudeness can be contagious.

A study at the University of Arkansas followed employees throughout their work days. Those who perceived an insult earlier in the day were more likely to lash out at the colleagues later in the day.

Christopher Rosen, a business professor at the school, told the Washington Post that “When someone is uncivil to you, it forces you to spend a lot of mental energy trying to figure out what’s going on, what caused the rudeness, what it means. All that thinking lessens your capacity for impulse control. So you become more prone to be rude to others. People, in a way, pay it forward.”

In another study from the University of North Carolina, participants were exposed to instances of either rude or neutral behaviours. They also did a word puzzle where they had to unscramble words in a sentence that had either rude or neutral content. Then the participants were asked to report on what they experienced in the workplace over 10 days.

The participants who were exposed to rudeness in the experiment tended to perceive more workplace rudeness, have negative outcomes in mood, and perform more poorly at their jobs.

The researchers said that experiencing rudeness in the morning is especially important. It can lead you to see the rest of the day behind “rude-coloured glasses”.

Airplanes can be the perfect lab to witness this see-rude-be-rude effect in action. It may not be entirely all our fault.

A BBC article noted the many ways that flights affect our bodies and brains. The air pressure is like being at the summit of an 8,000-foot mountain, the humidity is lower than in some of the driest deserts, and the air pumped in can be as cold as 10°C.

The air pressure means we get less oxygen in our blood. That can affect our ability to think clearly and make decisions. The dry air can also mess with our sense of smell and taste. The combination of low air pressure and low humidity can enhance the effects of alcohol. And spending too much time at altitude, studies show, can increase tension, decrease energy, diminish our ability to deal with stress and make people less friendly.

So maybe Williams and the seat basher should both be forgiven. But back here on solid ground, take a deep breath, get lots of oxygen and practice conflict management. And beware of rudeness – it’s catchy.