Protests and the Sound of Silence 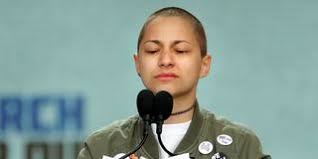 At the March for Our Lives rally in Washington on March 24, student Emma Gonzalez took the stage. After speaking for two minutes, and naming each of her 17 classmates who were slain at Marjory Stoneman Douglas High School in Florida, she did something remarkable.

Gonzalez stopped and said nothing for four-and-a-half minutes. Even when the crowd started chanting, she stood still, in silence. Only after a timer went off did Gonzalez conclude, noting that her time on stage equalled the time it took the school shooter to complete his rampage on February 14.

Activism and dissent hinge on free speech. But the absence of speech can be a powerful form of protest too. That’s what made the Gonzalez moment maybe the most memorable from the march.

We communicate with words, sounds and pictures. Yet there’s a long tradition of using all sorts of silent protests to draw attention.

Not far from where Gonzalez stood, blocks away and a century earlier, a group of women once advocated for the right to vote. They did it by protesting in front of the White House six days a week, from January 1917 to June 1919, when their cause was won. The suffragists carried out their vigil quietly and peacefully, earning the name the Silent Sentinels.

In the Indian freedom movement, Gandhi’s numerous hunger strikes were a form of silent protest and part of his philosophy of non-violence.

More recently, several causes have triggered silent protests. In 2015, an Austrian artist named Raoul Haspel released a track to bring attention to the poor treatment of refugees in Europe. It was 60 seconds of complete silence. The track, called Schweigeminute (which means minute’s silence) got radio play and went to number one on Austria’s iTunes chart.

Last NFL season, several players made their own silent statements during the pre-game playing of the U.S. national anthem. Their decisions to kneel, or stand with arms linked or fists raised, got many people talking about social justice issues.

Silence reminds us that language can be insufficient, at times, to express our deepest frustrations and desires. It gives us space to think. And it honours those who don’t even or who no longer have a voice.

Emma Gonzalez and her fellow protesters know that, when it comes to progress on guns (or anything else), actions speak louder than words. Sometimes, so does a bit of silence.