Playing in a Rock and Roll Brand 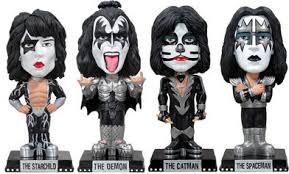 The fashion line Dolce & Gabbana, founded in 1985, and the rock band KISS, formed in 1973, may seem to operate in different circles. Yet recent stories about each got me thinking about the enduring power and rationale of brands. And bands.

Domenico Dolce and Stefano Gabbana told an Italian newspaper that their brand will cease to exist when they do.

“Once we’re dead, we’re dead,” stated Gabbana. The partners said they’ve turned down numerous offers to buy the label, and can’t envision another designer creating Dolce & Gabbana lines. “You can have all the money in the world, but if you are not free, what do you do? You don’t go to the grave with a coffin stuffed with money,” said Dolce.

KISS singer and guitarist Paul Stanley, meanwhile, has a different view on branding. In an interview with a Los Angeles radio station, he speculated the band could one day carry on without a single original member.

“KISS is a concept, an ideal, a way of performing and giving to an audience, and that goes far beyond me,” said Stanley.

He told another interviewer: “In some ways we’re much more a sports team.” The players change, but people still go out to the game and root for the uniform.

Which comments are more surprising?

Dolce and Gabbana are fighting the idea that brands can outlive their founders. People still buy Levi jeans, even though Levi Strauss, who founded his work pants company in 1853, died 116 years ago. What seems harder to buy is what Stanley argues, that bands are brands too and can survive after their creators are gone.

It’s odd to think of bands that way. Maybe because they’re artists – true originals who can’t be replicated, unlike a commodity. That’s how I see them. Who’d want The Beatles to go on without Lennon or McCartney, the Stones without Mick or Keith, Nirvana without Kurt Cobain, or U2 without Bono and The Edge?

Yet many legendary bands have remained active (decades after the height of their fame) with no or few founding members. For instance:

You’ve heard of The Doors? These bands are more like The Revolving Doors. With so much turnover, what makes some bands even real anymore?

We tend not to ask that in the world of commerce. There, the top brands are faceless and priceless.

It has been said that if all Coca-Cola offices and bottling plants burned down tomorrow, and every one of their employees departed simultaneously, the Coke name alone would still command billions of dollars.

The Interbrand calculations aren’t about stock price, but revolve around three things. One, financial performance. Two, the brand’s role in convincing customers to choose the company. Three, whether the brand allows the company to charge a premium for its products or services.

It can be hard to put a precise number on it. Branding experts often make a simple argument. Take two items that seem identical, like Coke and no-name pop. Assume they essentially look and taste the same. How much more will consumers pay for the brand name? The difference is one way of looking at brand value.

That’s for a can of pop. What about canned pop music? Would you pay more to see a version of KISS with no original members than you would to see a top notch KISS tribute band? At that point, is there any fundamental difference between the two?

Has the ship sailed?

It’s a question that philosophers have studied. Not related to KISS, but to the paradox of the “Ship of Theseus”.

This thought experiment, which goes back to the first century, is all about what defines the genuine article. Plutarch, the Greek biographer and essayist, asked whether an object that has had all of its constituent parts replaced is still the same object.

Specifically, is a wooden ship whose planks were replaced over time, bit by bit, ultimately the same vessel? A more modern variation on the question is known as “My Grandfather’s Axe”. If your father replaced the handle and you replaced the head, is it still your grandfather’s tool?

The next KISS may not be your grandfather’s KISS. The band’s manager, Doc McGhee, once said this: “KISS is more like Doritos or Pepsi, as far as a brand name.” McGhee felt that an entirely new lineup could conceivably “carry the franchise”.

So while Dolce & Gabbana might kiss off, KISS might continue in another fashion. Once someone puts on the KISS makeup, who can even tell who’s under it? Maybe the next iteration of the band can adopt the old Coke slogan: “the real thing”.