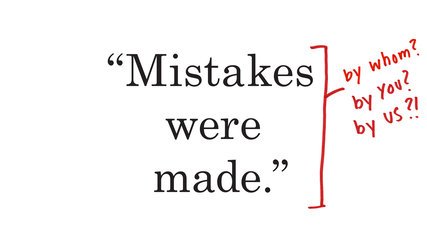 People always have the chance to improve. Every day, we can strive to make ourselves, our families, our workplaces, our institutions, our communities and our world better. When these opportunities arise, are we active agents of change or passive observers?

That’s a big question for anyone working in communications. After all, we craft the information and make the case around so many critical issues and causes. So we’re in a position to influence progress.

Active or passive? I think about that choice a lot. Lately, for an unexpected reason.

Whenever I write or edit, I’m mindful of using the active voice. That’s a stronger and clearer way of expressing an idea. Consider: A decision was made by the committee that the program will be implemented. Or: The committee decided to implement the program.

The passive voice is more of a slog for the reader, takes more space and is never as direct as the active voice.

But it’s more than that.

Journalist and essayist Sydney J. Harris once wrote: “We have not passed that subtle line between childhood and adulthood until we move from the passive voice to the active voice — that is, until we have stopped saying ‘It got lost’ and say ‘I lost it’.”

Harris is right on. Think of the “mistakes were made” excuse, which abdicates accountability. The active voice isn’t just about the subject of the sentence. It’s about taking responsibility.

Here’s what got me thinking about this notion and the terms we use to describe issues. Harvey Weinstein.

The public at large has just learned about the producer’s alleged history of sexual harassment and sexual abuse. Multiple women have told their tales, in wrenching detail. The stories are sickening and infuriating.

On Twitter, a thread about Weinstein led me to some comments made by Jackson Katz. He’s an author, lecturer and consultant on issues of gender, race and violence. In particular, Katz is an activist in moving men to work to promote gender equality and prevent gender violence.

Katz gave a widely viewed TED talk on the topic. He has said that the language we employ to discuss it is often lacking. In part, that’s because we use the passive voice.

For instance, Katz doesn’t like to talk about violence against women. It’s not that he’s ignoring the issue. To the contrary. He just disapproves of the phrase. What’s missing in it? Men, he says. The active agent.

Say “violence against women”, and Katz suggests it sounds like “Violence is a bad thing that happens to women but nobody is doing it to them, they are just experiencing it kind of like the weather. If you insert the active agent, men, you have a new phrase: ‘men’s violence against women’. It’s more accurate and honest.”

Changing a culture isn’t easy. It takes responsibility. As Harris noted, there’s a wide chasm between “it got lost” and “I lost it”.

There are far too many Weinstein stories out there, in every type of workplace and field, and across society. When we learn about violent or disrespectful words, attitudes or behaviours (or witness them), let’s have active voices.

We can make a difference when we speak up. But nobody will hear us if we use the passive voice.