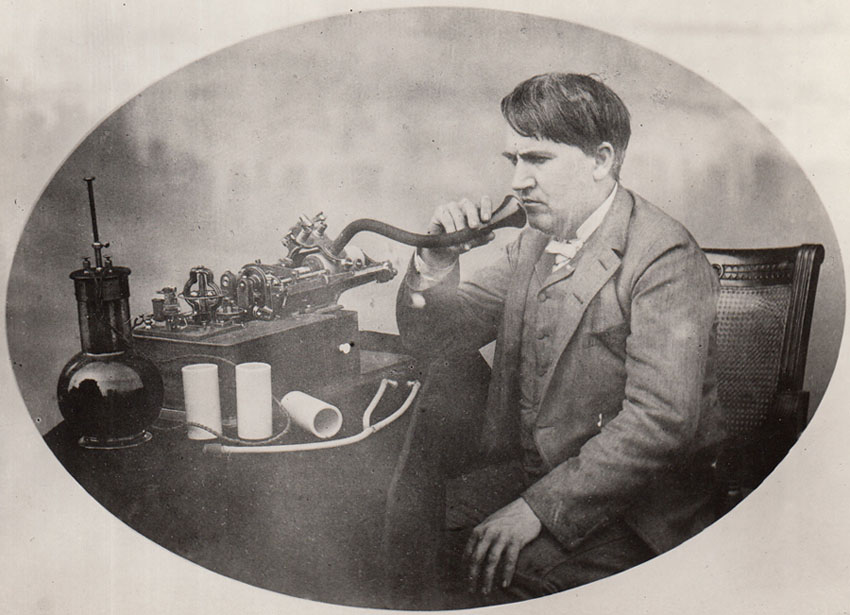 Ever feel like media has become fragmented, crafted in bite-sized chunks and tailored for devices that allow us to consume it in a solitary manner?

You might think that this is a modern phenomenon. But don’t point to the likes of social media, narrow-casting and iPhones. Instead, look way back to a technology that debuted on this day 140 years ago.

Before there was Spotify and streaming, mp3s and CDs, LPs and cassette tapes, 45s and 78s, before all of that, there was the hand-cranked phonograph. Eventually we would call it a record player. Thomas Edison demonstrated it for the first time on November 29, 1877.

The word “phonograph” comes from the Greek for sound writing, similar to how we got photograph for light writing. Right after Edison’s demo, a newspaper marvelled at the idea – can you believe it? – that people would be able to hear the inflections and tones of someone’s voice 100 or more years after their death.

Originally Edison envisioned that we would use the phonograph to preserve the speeches of leading figures of the day, record dictation for writing letters, chronicle family histories or aid in teaching. Soon enough, he realized that his device would be most suited to playing recorded music.

A few years ago, an article in the Smithsonian magazine listed many of the ways that the phonograph changed music. Consider just four impacts:

1. To fit the limited physical length of recordings, composers had to condense their creations. Longer musical works demanded attention. Now there was a shift to short, catchy and, often, formulaic. The phonograph gave us the template for the 3-minute pop song, which has lasted to this day.

2. Before the phonograph, people had to listen to music live (or play it themselves). Opportunities to hear any particular piece by a specific performer might be few and far between. As Smithsoniannoted, “The phonograph altered how people heard music. ‘The music you want, whenever you want it,’ as one phonograph ad boasted.”

3. People began to identify themselves based on their favourite style of music. You were a blues, jazz or opera person. Another old ad said: “What you want is your kind of music. Your friends can have their kind.”

4. Music had been a social occasion, whether in a bar or bandstand or around the family piano. Now, you could listen to music all by yourself.

Does this strike a tone?

Traditional media might seem simpler, but only in retrospect. That antique phonograph was disruptive in its own way.

Not everyone sees it that way.

Recently in The New York Times, David Sax, author of The Revenge of Analog: Real Things and Why They Matter, wrote that the idea that digital makes everything better is a fantasy. He observed that sales of instant-film cameras, paper notebooks and board games are up. E-book sales are flat, while print books are on the rise again.

Sax noted too that vinyl records are booming. Many people are wistful about the format, including people who born after its original demise. Are they nostalgic for the sound? The concreteness of the object? A bygone era?

Maybe, but make no mistake. Those vinyl records that Sax mentions sentimentally were revolutionary. Not just in their physical reality but in how they altered our media experiences.

“What we can do,” writes Sax, “is restore some sense of balance over our relationship with digital technology, and the best way to do that is with analog: the ying to digital’s yang.”

I don’t see this as an analog vs. digital question, with analog as the supposed comfort food. Look at the Smithsonian list. It’s clear how some of the changes brought about by the phonograph apply to our contemporary media diet. Like content that’s short and easily digested, on demand and made for mass or micro audiences alike.

That’s not good, bad or indifferent. It just is.

Edison didn’t know it, but in a way his phonograph was a precursor for everything from Twitter to Netflix. Yes, technology changes the dynamic with an audience. But it’s people, not just devices, that also determine how we ingest words, music, images and ideas.

The good old days, in society and media, were complex and radical too. We’ve usually been moving in certain directions for a lot longer than we think. We just have to cut through all the noise and listen closely to the signals.