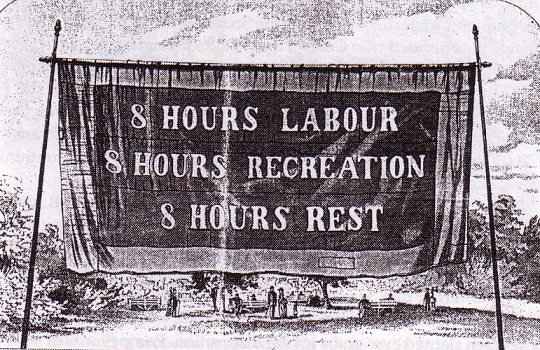 The Labour Day long weekend marks the unofficial end of summer. We’d like even more time off. Which makes this the perfect time to reflect on a passionate group of Toronto printers who fought for exactly that. In Canada, Labour Day owes its origins partly to them.

Back in 1872, working days were long for many people, as long as 12 hours. A protest movement spread around the industrialized world, including to Canada, to shorten the work day to nine hours. The Toronto Typographical Union was among those that took up the cause.

That year, in March, the Toronto printers went on strike. Publishers hired replacement workers, but the printers had their supporters. Strikers and those who wanted to show solidarity marched to Queen’s Park in Toronto for a rally in April. Along the way the crowd grew to 10,000.

Employers fought the strike. That included George Brown, one of the Fathers of Confederation and a leading politician of the day. He was founder of The Globe newspaper, and started a move to get the strike’s leaders charged with criminal conspiracy.

Prime Minister John A. Macdonald, a rival of Brown, pledged to enact legislation to protect workers. In June 1872, his government passed the Trade Unions Act.

The protest parades that were held to back the nine-hour movement, and the printers’ strike, sparked annual celebrations of the worker. A U.S. labour leader saw one in Toronto, and organized the first unofficial American Labour Day in 1882. In 1894, Labour Day became official in Canada.

We couldn’t get to a standard eight-hour day without getting to a nine-hour one first. If you go the corner of Queen’s Park Crescent East and Grosvenor Street in Toronto, you’ll find a plaque commemorating the printers’ strike.

So while we enjoy a day off for Labour Day, spare a thought for the long gone Toronto Typographical Union. We couldn’t write the story of workplace rights without a group of Toronto printers.