King of All Speech 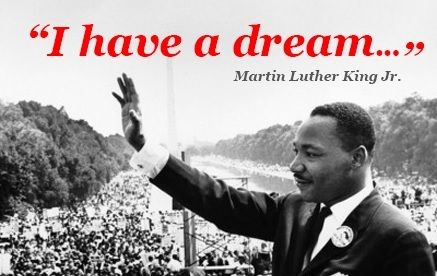 Anyone who has ever written or delivered a speech knows how much goes into crafting each line. Rare is the speaker who can ad lib a spellbinder. Try it with an audience of 250. Now multiply that by 1,000.

Civil rights leader Martin Luther King Jr. was also known as an accomplished writer and orator. Yet the most famous lines of his most famous speech weren’t in his original draft at all. They were off the cuff.

On the 50th anniversary of King’s assassination, April 4, 1968 in Memphis, consider the speech of his that still reverberates.

“Don’t use the lines…it’s trite”

It happened at an August 1963 in Washington, at a march advocating jobs and freedom. The night before, King’s draft was pretty much ready. He asked his aides for some last-minute advice.

According to Gary Younge’s book The Speech: The Story Behind Martin Luther King’s Dream, an advisor named Wyatt Walker said: “Don’t use the lines about ‘I have a dream’. It’s trite, it’s cliché. You’ve used it too many times already.”

King had, but that phrasing hadn’t made a huge impact. So the next day, when King got set to speak, the lines were nowhere to be seen in his draft.

King looked out at the crowd, some 250,000 strong, from the steps of the Lincoln Memorial. He started to give his prepared remarks. Heading towards the end, gospel singer Mahalia Jackson, on stage behind him, called out: “Tell them about the dream, Martin.”

“I have a dream,” King said, “that my four little children will one day live in a nation where they will be judged not by the colour of their skin, but by the content of their character.”

King set his speech aside. He spoke extemporaneously. With the cadence of a preacher, King talked about equality and justice. He began eight consecutive paragraphs with the same words “I have a dream”, using a rhetorical device called anaphora. That means repeating phrases at the beginning of sentences, lending them emphasis.

With the “I have a dream” refrain, the speech soared. As he reached the climax, King laid out the challenge to “let freedom ring” (he said it nine times), and foresaw a day when everyone would cry out “free at last”. Words that would also cement the speech’s place in history.

In winging the latter part of his remarks, King transformed those 1,651 words (as delivered) into what one group of scholars named as the greatest American speech of the 20th century.

When it was over, King gave the original typewritten manuscript to George Raveling, a volunteer at the march and later a college basketball coach. Raveling still has it and has pledged to never sell it, although he has been offered as much as $3.5 million for the pages.

Fifty-five years after the “I have a dream” speech and almost 50 years after he died, on a Saturday afternoon in February 2018, a 9-year-old girl stood on a stage before another massive Washington crowd. She was Yolanda Renee King.

Her grandfather had dreamed about his children’s lives. Now, speaking at the March for Our Lives gun control protest, the young girl referenced that 1963 speech. “I have a dream,” she said, “that enough is enough.”

Then King’s granddaughter led the crowd in a chant: “Spread the word, have you heard, all across the nation, we are going to be a great generation.”

The Martin Luther King Jr. Memorial in Washington has a centrepiece that’s based on another line from his 1963 speech: “Out of a mountain of despair, a stone of hope.”

The future is never written in stone. The forces of progress march on, sometime slowly but maybe inevitably. Speeches aren’t action, but they can prompt it.

As both Kings seemed to know, when you want change you sometimes have to flip the script.