Keep Your Thoughts and Prayers 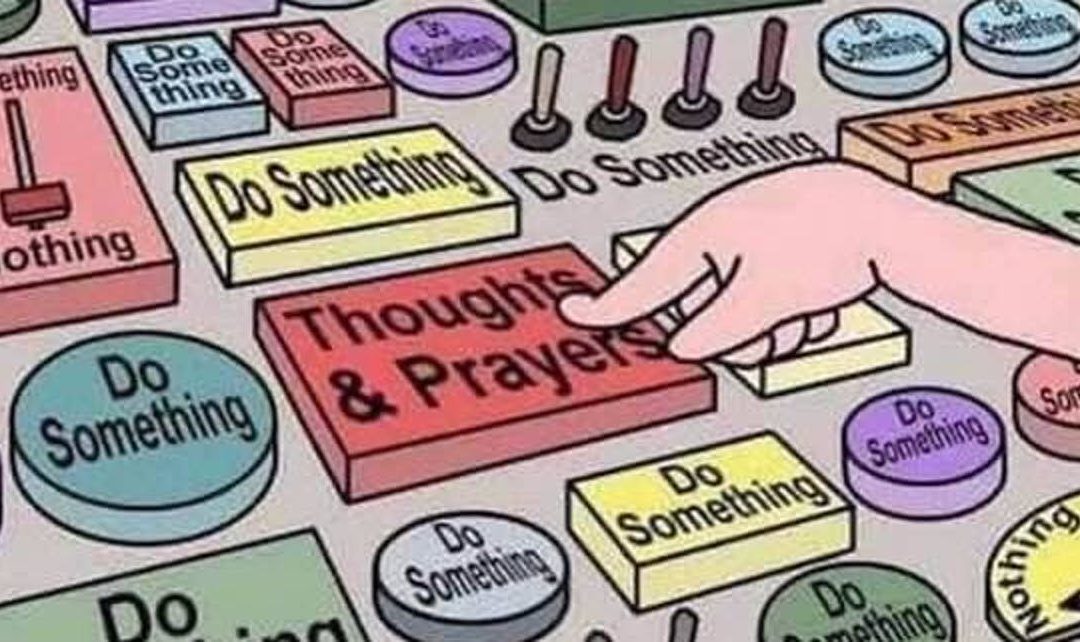 December brings all sorts of year-end awards. One that I look forward to is the Word of the Year. That’s a real thing, which a few dictionairies name. It’s the word that somehow sums up what was happening in 2018.

Oxford just named “toxic” as the winner. Toxic saw a 45% spike in the number of times it was looked up on oxforddictionaries.com over the past year. The word has been used in a variety of contexts, says Oxford, that reflect the news and mood of the year. Think toxic culture, toxic chemicals, toxic masculinity and toxic environment.

Dictionary.com picked as its winner “misinformation”. They took care to distinguish it from disinformation, which they define as “deliberately misleading or biased information; manipulated narrative or facts; propaganda.”

Toxic and misinformation each say a lot about these past 12 months. I have my own nominee for worst phrase of the year.

You’ve probably heard and seen it a zillion times in the aftermath of a tragedy. Usually, from politicians who send out their “thoughts and prayers” for victims and their families.

It’s not only that I find the expression to be meaningless and lazy, but that I also feel it does an actual disservice.

What becomes infuriating is the use of “thoughts and prayers” not to augment concrete action but to replace it. Talk about toxic.

If you’re a policy-maker, propose something that makes a difference to the issue at hand. Otherwise, you’re just in the way.

After the shooting at Marjory Stoneman Douglas High School in Florida in February, one woman sent her elected representative a cheque. On the line to enter the amount, she wrote “thoughts and prayers”; that seemed to be, she explained, the politician’s solution to mass shootings.

Four months later, after another shooting at the office of the Capital Gazette in Annapolis, Maryland, one of the reporters who made it out was interviewed on CNN. Selene San Felice said she doesn’t give a hoot about “thoughts and prayers”. Except she used a much stronger four-letter-word than hoot, live on the air.

(Now San Felice and colleagues are on one of the four covers of Time magazine’s Person of the Year issue, honouring journalists under attack and highlighting the war on truth.)

The “thoughts and prayers” expression doesn’t just pop up after shootings. And it isn’t just an American phenomenon. It seems to be to the go-to crutch after every sort of loss, from natural disasters to transportation mishaps.

There’s a Wikipedia entry for “thoughts and prayers” now. It references criticism that the phrase is a form of civilian or political slacktivism. Not the least you can do, but pretty close.

And for everyone else who uses “thoughts and prayers” flippantly and who feels hurt by critiques of the term, I offer my sincere T&P.