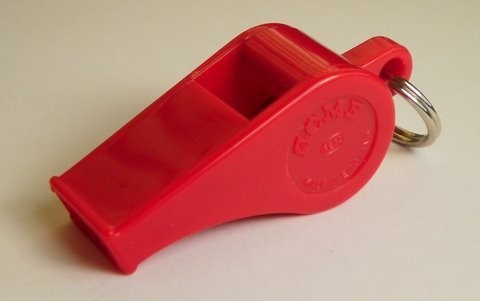 Whistleblowing is in the news. In modern usage, the term refers to anonymously or confidentially reporting on misconduct, corruption, waste, health and safety violations, and any other wrongdoing. Across corporations, governments and other institutions, whistleblowers play an essential role in calling out illegal or unethical activities. They’re truth-tellers.

In Canada, the Public Servants Disclosure Protection Act came into effect in 2007. It encourages personnel to come forward if they believe that serious wrongdoing has occurred and, if they do so, provides protection to them against reprisal.

Originally, the term simply described jobs that used whistles as an alert. Police offices and sports referees were each called “whistle blowers” (two words). That goes back to the 19th century. Before that, cops sometimes used rattles and referees used hankies.

The word “whistle” comes from the Old English hwistlian, and is similar to the Old Norse hvisla, which means “to whisper”. It’s also related to the Proto-Germanic hwis, referring to a hissing sound.

Whistles are among the oldest communication instruments. We’ve used them ever since crafting the first ones from wood, bone or shells. In days of old, whistles were common on ships and among soldiers.

Even without a tool, people have used whistling as a non-verbal language throughout history. You can still find these musical languages in places like Southern China, Papua New Guinea, the Amazon and sub-Saharan Africa.

Whistle languages tend to occur in mountainous and dense forest regions. One reason is that whistles cover much greater distances than speech, in some open valleys as far as 8 km.

Linguist Julien Meyer, of the University of Grenoble, has identified more than 70 groups around the world that use whistles to communicate. As Meyer explained to the BBC, practitioners mirror a simple spoken language, using things like changes in pitch and the intervals between whistles to convey meaning.

He says that outsiders have a hard time believing that a series of whistles are that comprehensible. However, as the BBC reports, “Meyer has found that fluent whistlers can decode the sentences with more than 90% accuracy – around the same intelligibility as speech.”

There’s a theory that humans whistled before we could talk. Whistling was part of the evolutionary path to speech.