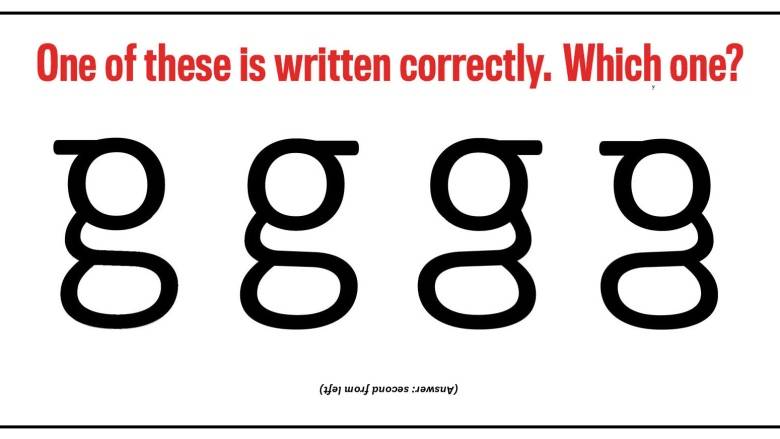 Ever wonder why any given message can be hard to recall? Never mind all the pages, paragraphs, sentences and words. Consider how hard it can be, apparently, to remember how to write just a single letter.

Take a look here at the four efforts to depict a lower case “g”. Three are incorrect, and most people don’t know the right one at a glance. They can’t draw it if challenged. In fact, they don’t even realize that there are two ways of writing “g”.

The one we typically write by hand in lower case looks like a circle with a hook attached. That’s the “opentail” version.

The “looptail” version is rarely written, but is used in fonts like Times New Roman and in a high percentage of printed (or typed) material. Yet we often fail to even recognize it.

Researchers at Johns Hopkins University tested this out. They asked 38 adults to list the letters that have two lower case varieties. Two people named “g”, and one could write both forms. Even when told that there are two forms, some people still disagreed with that fact.

In another part of the study, 16 people were asked to: 1) read a paragraph filled with the looptail “g”; 2) say each word with a “g” aloud; and 3) write the “g” as they saw it. So the group was super focused on the looptail “g” …and half still wrote the opentail form. Of the other half, just one wrote the looptail version correctly.

Lastly, a group of 25 participants had to pick the correct looptail “g” out of a lineup. Only seven people got it.

“We think that if we look at something enough, especially if we have to pay attention to its shape as we do during reading, then we would know what it looks like, but our results suggest that’s not always the case,” said Michael McCloskey, a cognitive scientist at Johns Hopkins.

The struggle to recall what should be familiar isn’t unique to the letter “g”.

UCLA professor Alan Castel asked about 100 students to draw the Apple logo from memory. This is something they encounter daily, multiple times, on various devices. Only one student succeeded.

If you think you can do it, try it now. Is the bite on the left or right? Does it have teeth marks? Is there a stem? Does the leaf lean left or right? Is the bottom flat or does it have a little curve? Lots of possibilities. Not as easy as you might think. Even with these clues.

Castel told the Harvard Business Review that people have “attentional saturation”. We have decent recall, but not always for all details. Research shows that people have just as much trouble accurately reproducing other things they use or see routinely. Like details on coins, computer keyboards, calculator keypads, elevator buttons and road signs.

When Castel and his colleagues went through safety training, they decided for fun to see if they could remember the locations of the nearest fire extinguisher in their building. Nobody could do it. When one colleague returned to his office, he realized, to his surprise, that the extinguisher was right next to his door. He had worked there for 30 years.

When conveying information, we know that we can’t make assumptions about what people will recall. We can try to make it memorable. But sometimes, no matter what you do, there are powerful G-forces in the way.