Do You Experience Word Aversion? 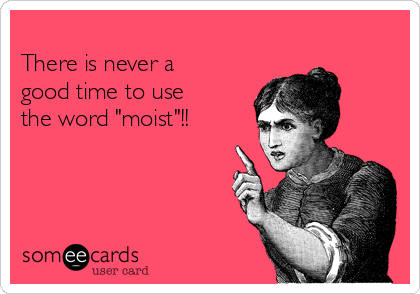 You have a least favourite word? One that makes you cringe or grosses you out?

There’s a name for that: logomisia. It refers to a distaste for a certain word. The phenomenon is also called word aversion.

In studies, moist often tops the most disliked list. Other words that surveys say are widely despised include phlegm, mucus, discharge, crevice, curd, flap, whatever.

Why such visceral reactions?

Paul Thibodeau, a cognitive psychology professor at Oberlin College, conducted a well-known study on word aversion. He says the associations of particular words (with bodily functions, for instance) makes them disagreeable.

There are other possibilities. “The phonology of certain words is inherently unpleasant,” explains Thibodeau. In moist, for instance, many people don’t like the combination of the “oi” sound juxtaposed with “ss” and “tt”.

“A second possibility, also related to phonology,” Thibodeau writes, “is that words like moist are aversive because speaking them engages facial muscles that correspond to expressions of disgust: a facial feedback hypothesis.”

It comes down to the sound, meaning, usage or connotations of a word. And you end up with logomisia, from the Greek for word (logos) and hatred (misia)

The flip side is linguaphilia, a love of words (and language). A British survey once identified the most beautiful words in the English language. So to end on more pleasant note, let’s look at the top 10 (counting up to #1): tranquility, liberty, freedom, destiny, fantastic, eternity, love, smile, passion and mother.

Much better. What’s your most loved and loathed words?