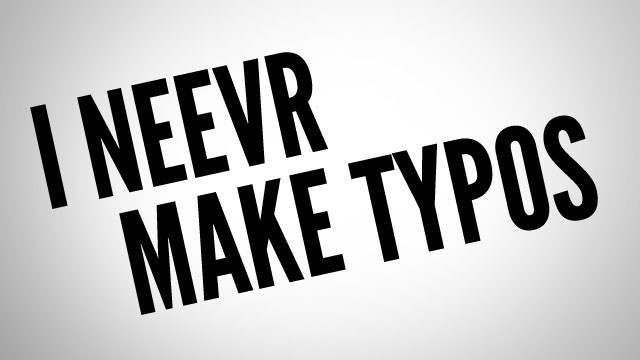 A typo may be an accident, but it’s no crime. Unless you’re a Long Island thief who’s trying to avoid prison.

Last year, CNN reported on a scheme by Robert Berger, who had been charged with attempted grand larceny and possession of stolen property. When Berger was due to be sentenced, his lawyer showed up in court without him. Why? The lawyer said he learned Berger had died, and produced a death certificate that Berger’s girlfriend had provided.

Here’s where the trouble started. Prosecutors noticed inconsistencies with the font type and size used on the certificate. Moreover, the word “registry” in the name of the issuing department was misspelled as “regsitry”. The death certificate (unbeknownst to Berger’s lawyer) was a bogus.

Additional charges were filed against Berger. “Submitting fake documents to prosecutors is always a bad idea,” said District Attorney Madeline Singas, “and failure to use spell check made this alleged fraud especially glaring.”

It’s hardly the first time that a typo has proved costly.

In 2006, Alitalia advertised a flight from Toronto to Cyprus for $39 instead of $3,900. The typo stayed up for 12 hours. Alitalia tried to cancel the tickets already booked, but then decided to take the hit and honour the low fare.

Mizuho tried to cancel the order, but too late. The firm lost at least 27 billion yen on the stock trade – $225 million.

Some typos aren’t just momentary slips; they’re actually etched. So it was when the national mint of Chile was issuing a new series of 50-peso coins in 2008.

Somehow, everything got through the production process without anyone noticing a typo on a rather important word: the country’s name. It appeared on the coin as “Chiie”. Thousands of the coins made it into circulation. The managing director of the mint? He was taken out of circulation, fired for the incident.

You’d think that the computer programmers at NASA would quality control every line of code. Even they made a typo in 1962, when they omitted a hyphen. Mariner 1 was supposed to head to Venus. Instead, the software typo glitched up some key commands, which led to a self-destruct 293 seconds after launch. That one cost $80 million.

Those large-scale mishaps capture attention. What about our routine communications? In the age of spell check and auto correct, do typos make us look bad?

Several studies have found that people do judge you for typos.

In one study, reported in The Conversation, linguistics professors from the University of Michigan had students review responses to an ad for a housemate. The students were presented with three versions:

The study participants rated the potential housemates who made errors as less desirable.

A previous study out of North Carolina State University had people assess a potential new colleague based on an e-mail message. When the message included many grammatical errors, the sender was rated as less conscientious, intelligent and trustworthy.

So are typos a sign that someone is sloppy or inattentive? Someone who will mess up when the stakes are higher?

Some people argue that you shouldn’t hire someone who makes a typo on their resumé or job application. That may be short-sighted, suggests a piece in Inc.:

“Typos are made because we’re so busy trying to convey meaning that we don’t always notice when we’ve made an error. We all know that it’s difficult to catch our own typos, but why is that? When we’re proofreading our own work, we know the meaning we want to convey. Because we expect that meaning to be there, it’s easier for us to miss when parts (or all) of it are absent.

“The reason we don’t see our own typos is that what we see on the screen is competing with the version that exists in our heads. Errors in no way indicate a lack of intelligence or even attention to detail. They do indicate a person who is very interested in getting concepts and ideas down on paper.”

The reaction we have when we see typos made by others may indicate something else – something about us.

As a writer, I check my copy carefully. I do get bothered if I make a typo and it slips through to a client, even in a draft, and even though it’s eventually caught. But when I see someone else make a typo, I don’t get worked up. We’re all human. Mistakes happen.

Still, you can bet that I made sure this blog has no tyypoos at all.