Can We Agree that an Apple is an Apple? 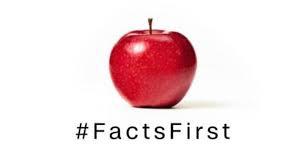 Can you alter someone’s opinion by bludgeoning them with facts?

If only it was that easy.

Think about health or safety promotion. These campaigns have no shortage of the facts on their side, on anything from smoking to speeding. Yet people still make detrimental choices.

Now, try to change people’s views on any number of complex personal, social or political issues. What happens when you’re dealing with deep-seated beliefs, values and biases?

Recently, Dr. Tim Carey wrote a piece for PsychologyToday.com called “How to Bring Someone to Their Senses”. On a range of issues, we can feel that others are thinking irrationally or illogically. If so, facts will win out. Right?

When we talk about people “coming to their senses”, we often mean getting them to agree with a widely-recognized view. (Or at least agree with us.) However, Dr. Carey, a behaviour management specialist, says this argument is built on a faulty premise.

Here’s the problem. “From whose perspective is the person thinking irrationally or illogically?” writes Dr. Carey. “In most situations, it’s probably not the case that things seem illogical or irrational to the person. Generally, people’s worlds make sense to them.”

He says people change their perspective when they literally do just that: step back and see the bigger picture. “From this altered vantage point they realize things that hadn’t occurred to them before, which allows them to put things together differently.”

So will people believe that an apple is an apple?

CNN recently launched a branding campaign. You see a red apple on a white background. The narrator says:

The tagline is “Facts First”. It should be self-evident that reputable news organizations deal in facts. Although it’s a sign of the times that they have to remind people of that, uh, fact.

Writing about the campaign, Leonard Pitts, a Miami Herald columnist, bemoans a retreat into what he calls “facts-free incoherence”.

Pitts blames everything from social media and the internet (which amplify lies), to the education system (which he says doesn’t produce enough critical thinkers), to the media itself (which gives a platform to false equivalencies).

The very deliberations that went into creating the CNN “Facts First” ad underscore the challenge ahead.

Scott Vitrone, chief creative officer at ad agency Figliulo & Partners, wanted to use imagery that was simple and clear. Why an apple? The agency tried many objects, but Vitrone says the alternatives (even something as straightforward as a bicycle) evoked too many negative connotations. The apple, people agreed, had no baggage.

Even the fact of a tangible object became up for debate.

“We almost have to re-learn what a fact is considering the environment today,” says Vitrone. “It’s like the first day of school. You start with an apple and then, hopefully, you can build from there.”

Facts become the basis for open, honest and productive debate. So back to my original question: can you alter someone’s opinion by bludgeoning them with facts?

Not usually. And it’s trickier still when we view the same objective reality through a subjective lens.

As Pitts writes, if you can’t tell apples from bananas, you’ll swallow anything.