Caesar and All the News That’s Fit to Carve 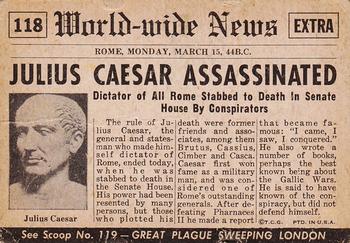 If a daily newspaper was delivered to your door in ancient Rome, one of this month’s dates would read Idus Martiae. It’s better known as the Ides of March, which on the Roman calendar corresponds to March 15.

The date became infamous in 44 BCE, when Julius Caesar was assassinated that day. That would definitely be front page news. In fact, Caesar has a place in history for being part of the precursor to daily political coverage in the media.

Starting around 130 BCE, the goings on of legal proceedings and trial outcomes were carved into stone or metal and displayed in public places like the Forum. These were called Acta Diurna, which means daily events or daily public record.

The Acta Diurna is considered to be the first daily gazette. Another important record was the Acta Senatus, the minutes of the proceedings of the Roman Senate.

At first, Senators had access but not the public. During his consulship, Julius Caesar wanted to make the Senate’s discussions and decisions more transparent. So he had them recorded in the Acta Diurna starting in 59 BCE.

Over time the Acta Diurna kept expanding its content, to include public announcements like notable births, marriages and deaths, as well as news of military battles, the cost of grain, and even gossip and human interest stories.

A book called The Function of Newspapers in Society: A Global Perspective notes that, through handmade copies, the Acta Diurna circulated widely throughout the Roman Empire. “Besides military might and multi-tiered government, communication was the glue that held the empire together,” the book states. “The Acta Diurna created a sense of community as it united the far-flung empire.”

Sharing the news can always create that sense. The Acta Diurna captured that idea in a phrase it popularized: publicare et propagare – make public and propagate. So on this year’s Ides of March, give a thought to Caesar and his role as a media pioneer.