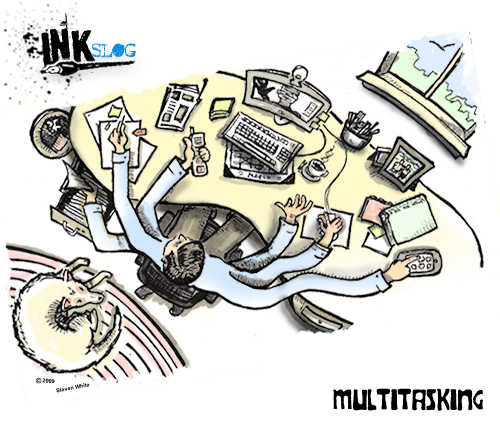 You might be doing something else while you’re reading this. I get it. We all multitask, whether texting while talking, working on two documents simultaneously, or scrolling through Twitter while watching TV and eating dinner.

How does that affect people’s ability to focus? If you’re in the business of crafting messages (or trying to comprehend them), the stakes are high.

A new study led by a professor of psychology at UCLA suggests that our divided attention does hurt memory. However, we can still focus on what matters most.

In the UCLA experiment, researchers showed almost 200 students a screen where 120 words popped up one at time, in groups of 20. Each word stayed up for three seconds, alongside a corresponding number (at random) from 1-10. After each set of 20 words, participants were asked to type the words they could remember.

There were two catches. First, the test wasn’t just about recalling as many words as possible. The students were scored based on the point value of each word. So the words paired with higher numbers became relatively more important. Second, the researchers toyed with the participants.

What do you think happened?

The group that viewed the screen with no distractions recalled eight words, on average, from each set of 20. Both groups who listened to music remembered almost the same number. The group that had to pay attention to runs of odd numbers had a tougher time, understandably, remembering just five of each set of words.

Here’s the revelation. The multitasking didn’t affect the participants’ recall of the most important information, i.e. the words tied to the highest numerical value.

Across all four groups studied, the participants were almost five times likelier to remember a 10-point word than a 1-point word.

“The data are clear in showing that with divided attention we don’t remember as much, but we are still able to focus on what’s most important,” said study leader Alan Castel.

Don’t get too excited. Other research shows the damage of multitasking.

One study, from the University of London, had participants handle multiple responsibilities during cognitive assignments. When multitasking, their IQ performance was as is if they had stayed up all night. For some participants, their IQ scores dropped to the average range of an 8-year-old.

Another study from the University of Sussex looked at what happens to the brain when you’re using multiple devices. Neuroscientists used an MRI for this. They found that the people who said they used a high number of media devices concurrently had smaller grey matter density in the anterior cingulate cortex. That’s the region responsible for cognitive and emotional control functions.

The Sussex researchers cautioned that the study reveals a link rather than causality. Still, could multitasking actually shrink your brain?

There really is no such thing as multitasking. Neuroscience research tells us that we simply aren’t built to perform multiple tasks that each requires high-level brain function.

When we believe we’re multitasking, we’re really just shifting quickly and serially between tasks. It’s more like a stop/start process, one that scientists say can actually take more time, be less efficient and cause more mistakes.

Something to think about before you act like a juggling octopus. As tempting as it is to try to cram more into our days and brains, it seems like genuine and effective multitasking is a myth.