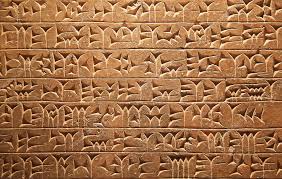 What’s the purpose of writing?

Obviously, it’s a way for humans to express themselves and share information. Yet when you consider the very origin of writing you get a quite specific and practical answer.

I was reminded of this when flipping through a new book by Tim Harford called Fifty Inventions That Shaped the Modern Economy. Harford has a BBC radio program and a podcast that talk about the things that have fundamentally transformed how we work, play and live. His book lists items like banks and bar codes, the gramophone and Google, clocks and concrete. And cuneiform.

Cuneiform is a writing system. The world’s oldest. It doesn’t have an alphabet or letters. Instead it uses an abstract script.

As Harford recounts in one chapter, in 1929 an archaeologist named Julius Jordan discovered a trove of clay tablets from Uruk, a settlement in the banks of Euphrates in what’s modern-day Iraq. The tablets were covered with cuneiform and were 5,000 years old, dating back much farther than ancient Egyptian or Chinese writing.

Estimates were that Uruk had a few thousand residents back in the day, which would have made it one of the first real cities in history. The cuneiform used there millennia ago – tiny conical, spherical and cylindrical shapes – stumped the experts.

What did this writing mean?

Archeologists eventually deciphered the script when they realized the figures were a stylized representation of tokens found in the region. Those tokens, in turn, represented the commodities of daily life.

The abstract script on the clay tablets was a way to keep track of the amounts and movement of goods. In essence, cuneiform was an accounting system or a record of a contract.

So that’s the first writing. Maybe today writers should think of themselves as abstract accountants of a different sort. Writers record the transactions not of commodities but of knowledge and notions, concepts and feelings. That free exchange, too, is what helps to build a society.

As Harford notes, people used to believe that the ability to write was a gift from the gods. Instead, he says, “It was a tool developed by mortals, and for a very clear reason: to run their economy.”

And to manage the marketplace of ideas.