Even Infants Know That Narratives Give Meaning 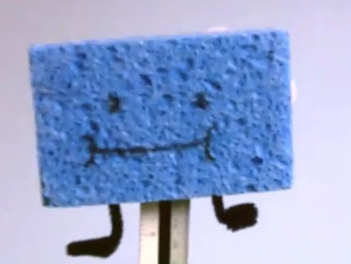 Once upon a time, Red Circle was struggling to climb the side of a mountain. When it finally got near the top, Yellow Triangle knocked Red Circle back down. Finally, Blue Square came along and pushed Red Circle from behind, to help it reach the summit.

This was a puppet show. In the audience Nora watched. Afterwards, she could pick which character she liked. Nora couldn’t talk – she was only six months – but reached for the Blue Square. So did almost every infant in this study by a Yale psychology professor named Karen Wynn, who runs something called the Infant Cognition Center.

Alan Alda describes the scene in his book, If I Understood You, Would I Have this Look on My Face? The actor hosted the PBS show Scientific American Frontiers, which led him to help found the Center for Communicating Science at Stony Brook University. His new book looks at how we can communicate better. (A few blogs ago, I wrote about another insight from the book: the curse of knowledge.)

The puppet study is instructive. The action was rudimentary and the coloured shapes were as basic as could be. Why did babies overwhelmingly select Blue Square? Were they drawn to the colour? To the shape?

No, Wynn explained. They related to the story.

“In order to sense a meaning to the action, there has to be a narrative,” Wynn said in Alda’s book. “This one’s attempting to do such and such, that one comes along and attempts to help, but this one comes along and tries to hinder. Babies are following events and understanding them in context. It doesn’t make sense without this narrative.”

Many studies illustrate the power of narratives, i.e. how it lights up the brain. (I blogged about a couple of those studies earlier this year.) The Wynn investigation tells us how that’s at play in our earliest days.

She has done similar experiments where puppets struggle to open a box. More than 75% of the six-month-olds reached for the helper puppet when given a choice.

Younger babies, who couldn’t yet even reach, still understood the puppet show enough to indicate a moral selection. Wynn documented how three-month-olds held their gaze on the nice puppet for six times longer than they looked at the mean puppet.

So a story about morals gives us the moral of the story. In communications, the right narratives are hugely persuasive. As Wynn’s studies show, even babies get it.