Does the Misuse of Literally Drive You Figuratively Nuts? 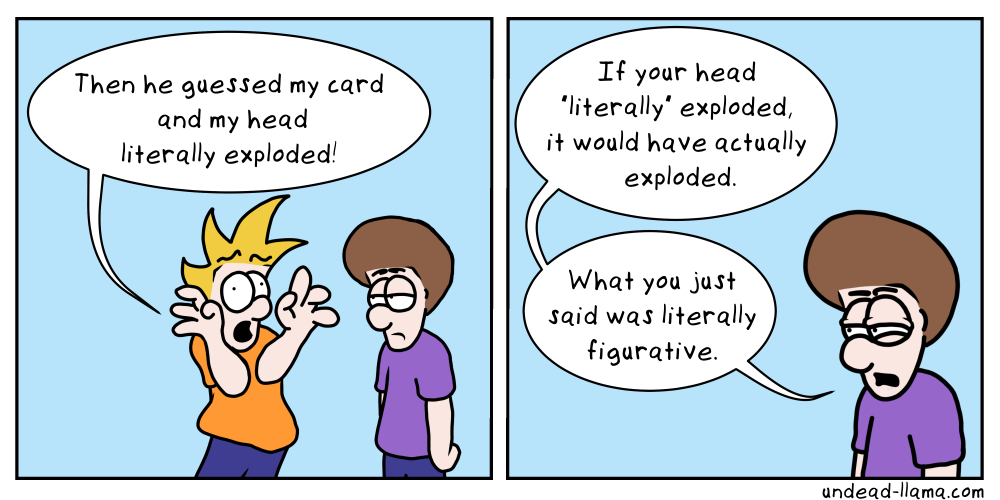 In a recent basketball game, Vince Carter of the Atlanta Hawks went on a shooting streak. Some might say he was on fire. A fine figure of speech. Maybe that’s what the headline writer on the Fansided site had in mind in creating this banner: “Vince Carter was literally on fire last night”.

Now, to be fair, the animation behind his head on the scoreboard showed flames. But in no way, at no time, was Carter running around the court ablaze.

How has “literally” come to literally mean “figuratively”?

“Literally” means actually. However, people often use it as a stand-in for “figuratively”, which has its own meaning: metaphorically, or to exaggerate.

When one of my kids gets mad, she says her head is literally about to explode. I stand back, just in case.

She may not be wrong, though. Dictionaries have a secondary definition for “literally”, indicating that it’s used colloquially to mean “in effect, virtually”.

That’s Merriam-Webster’s definition. In a blog on their site, they said many readers are not pleased. Some posted comments like this: “The dictionary is literally wrong.” “This is literally the stupidest thing I’ve ever read.” “I literally can’t even.”

The Oxford Dictionary posted its own blog on the topic, and noted that the secondary usage was first included in the OED in 1903. When Oxford updated its entry on “literally” online in 2011 they found even earlier examples, and now say this non-literal usage goes back to at least 1769.

As Oxford says, the correct usage can sometimes be problematic. In that it doesn’t add anything: “If you write ‘the book is literally 500 pages’, the statement may be precise, but its precision doesn’t depend on the presence of the word literally; indeed the emphasis it adds may introduce doubt about the precision.”

Oxford notes that in expressions that aren’t meant to be taken literally, adding “literally” reverses their figurative nature. They give this example: “He has literally put blood, sweat, and tears into earning a living. Take out “literally”, and the meaning doesn’t change; “blood, sweat and tears” remains a figure of speech.

Picking up on such idiosyncrasies of how we speak and write is a challenge for artificial intelligence. Getting it right is essential if machines are to get even better at analyzing language and having more natural conversations with humans.

In January, Changsheng Liu and Rebecca Hwa of the University of Pittsburgh introduced one solution at the AAAI Conference on Artificial Intelligence in Hawaii. As reported in ScienceNews, the two computer scientists designed a program that can parse whether you meant a phrase literally or figuratively, based on the neighbouring words.

In experiments to date, the system is about 75% percent accurate. Not bad. What’s the rate for how often humans really need to use “literally”?

A 2018 book called That Doesn’t Mean What You Think It Means collected the 150 most commonly misused words and explain their histories. Literally/figuratively is on the list. While the two words were once used much more with their separate meanings, that distinction has blurred to the point of erasure.

“We think having a word also meaning its exact opposite is dumb,” write authors Ross Petras and Kathryn Petras.

I’m not a member of the language police. But if “literally” isn’t required when it goes without saying (“my knife is literally sharp”), or to underscore a figure of speech (“Vince Carter was on fire last night” would do), then when do we need it?