Bringing Order to an Alphabet Soup 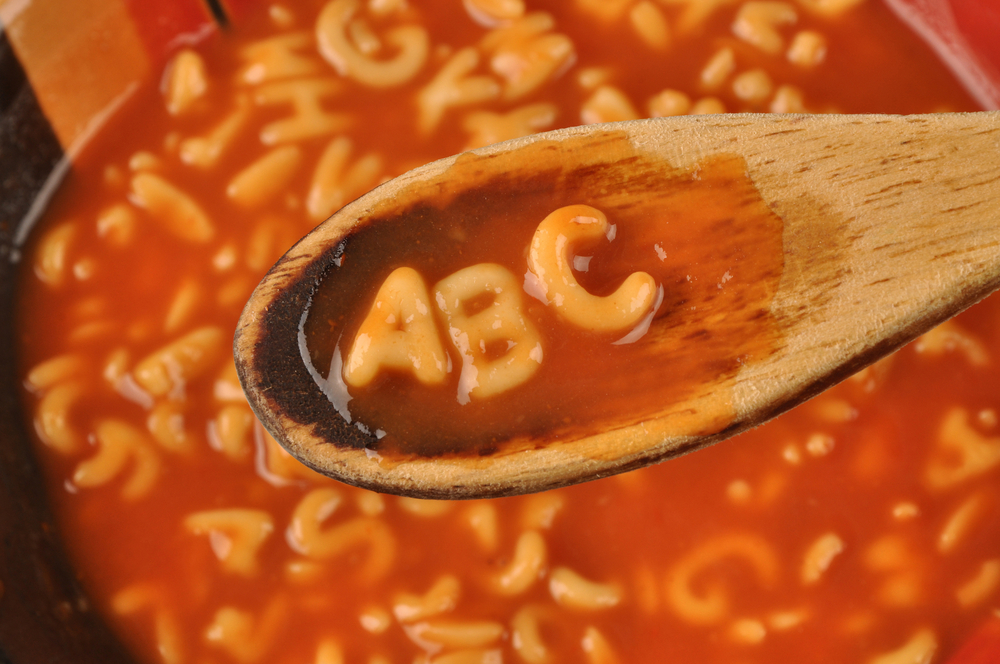 The other day on Twitter, I was following a thread about the most ridiculous demand a customer ever made of them. The responses were wild.

One person wrote that when he was working at a gas station, a customer wanted a refund on the gas he had just pumped into his car. He had changed his mind. Then there was the customer at an electronics store who wanted to purchase “the internet”.

My favourite: the woman who wanted a cashier to bag her groceries in alphabetical order. That one made me wonder. Did this shopper organize her fridge like that, apples to zucchini?

It got me thinking about alphabetical order. It’s such a basic part of how we learn to read and write. And it’s as old as recorded history.

Did you know that alphabetical order was first used in the 1st millennium B.C.? Semitic scribes did it using the abjad system, where each symbol or glyph stands for a consonant (it’s up to the reader to supply the vowels). Biblical authors used acrostics, where the first letter of each line spelled out the alphabet in proper sequence (or spelled a word or message).

The Great Library of Alexandria in Egypt, founded circa 325-270 B.C., organized works alphabetically, but just by first letter. The first head librarian, Zenodotus of Ephesus, also wrote a glossary of rare and unusual words, listed in alphabetical order.

So writers have been playing with alphabetical order forever.

Of course, there are many other ways to order things: numerically, chronologically, by importance, by topic, etc. You may think of such ordering as simply logical, but even something as seemingly benign as alphabetical order can have broad implications for authors.

The curse of alphabetical discrimination

In journals, the names of authors of research papers might be listed in order of their contribution, from most to least. However, in some cases authors (and there can be many) are listed alphabetically. Some researchers with last name initials later in the alphabet object. They say it gives their colleagues with A, B and C names, for instance, an advantage. There has even been a research paper in the journal Research Evaluation on what’s called “alphabetical discrimination”.

The author of that paper, a professor at the University of St. Gallen in Switzerland named Matthias Weber, says alphabetical discrimination can do damage. It may sound silly. But consider that in academia the notoriety of publication matters.

Weber is an economist. He notes that for faculty with an A surname compared to a Z surname, the likelihood of gaining tenure at a top 10 economics department is about 26 percentage points higher. As well, Weber says that the number of downloads on a major economics research paper platform is about 60% higher for A authors compared to Z authors.

If you think that sucks for Dr. Zucchini, think of anyone with a late alphabet last name who was always at the back of the class or end of the line at school. The positioning can have a lifelong impact.

A paper in the Journal of Consumer Research said that people with such names may be the fastest to jump at perceived deals when shopping. Why? All the years in school, they may have felt that got inequitable treatment. So when they get to exercise control, they seize on the opportunity. It’s a coping strategy, said one of the paper’s co-authors (whose name starts with C).

There’s a brand new book out called A Place for Everything: The Curious History of Alphabetical Order. Author Judith Flanders suggests that the printing press and the democratization of knowledge spearheaded the need for alphabetization. People needed a way to quickly pinpoint information, as in an index.

Still, a review in The Guardian notes that “Many scholars remained suspicious of using alphabetical order for reference purposes. It was somehow cheating, they felt, not to memorize large tranches of text or read books through from beginning to end.”

The review ends this way: “It may be a good moment to tell the hidden history of alphabetical order, when computer algorithms seem ready to do away with it. Who bothers with an A-Z atlas or a phone book in the age of the smartphone and the search engine? Alphabetical order may already have begun its long, slow decline into irrelevance.”

So maybe the woman who likes her groceries bagged alphabetically is holding on to tradition. Who’s to argue if she wants her green peas to live next to the green tea, the paprika by the papaya.